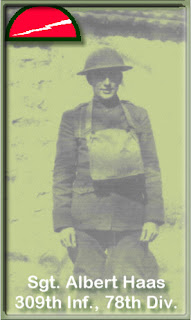 In early December 1918, almost completely recovered from the wound he had received in the Argonne campaign, my father, Sgt Albert K. Haas, was able to return to his unit, the 309th Infantry of the 78th Division. From Vichy, where he had been hospitalized, Albert went  by train to Nevers and from there to divisional headquarters in Semur. Next he was directed to hike on to the nearby village of Genay, where he was eventually billeted in a room in the home of Madame Laurent and her mother.

At Christmas time Albert was supposed to go to a special leave area, but something went awry with the railroad arrangements, so he and his roommate, Ed, were sent back from Semur to Genay to await orders. Arriving back in the village on Christmas Eve, they discovered Madame had misunderstood the new billeting arrangements and had given their room to two other men.

My dad later wrote, "After much discussion, we asked Madame's permission to sleep in the hayloft for the night. She did not think it good enough for us, but we finally convinced her it was. She insisted on climbing the ladder to the loft and taking a couple of white pillows with her for our bed. All our protest against misuse of pillows was in vain and we slept in the beds as arranged. It was rather a unique place to spend Christmas Eve."


On Christmas Morning, "Madame insisted they have breakfast in her home. It was the strangest breakfast I ever had, Beef soup, wine, bread and cheese." In the evening, an impromptu entertainment was given at the Y.M.C.A. hut and Ed and I took the old folks along. All civilians in the town had been invited to attend. They thought the perfectly rotten show was wonderful." That night he and Ed again slept in the hay loft.  Thus ended Christmas in Genay. The following morning he started for Semur again for transportation to the leave area in the Vosges Mountains, where he spent ten days.