Some Memorable Personalities of the Italian Front 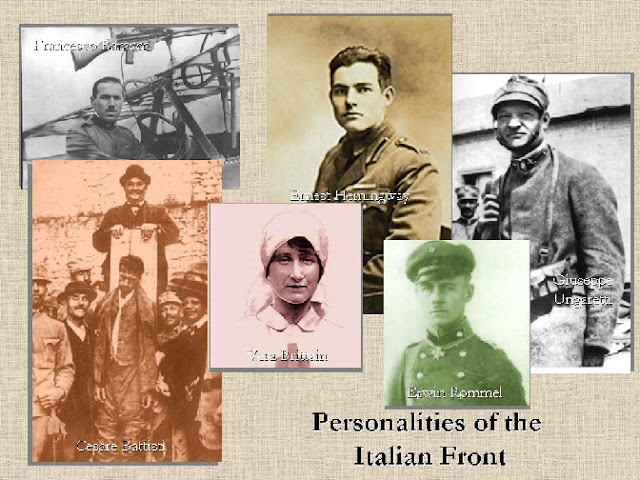 For me, a fascinating part of exploring any dimension of the Great War is gathering further evidence to validate my theory that the war was a unique and powerful force in shaping some of the most influential people of the 20th century. On my visits to the Italian Front, my hosts and guides have always done a wonderful job of sharing anecdotes about some of the famous and interesting participants of the war. I heard how proud Corporal Angelo Roncalli, the future Pope John XXIII, was of his war service. I saw where Mussolini served on the Upper Isonzo as a Bersaglieri (mobile light infantryman). And I learned one sure way to start an argument was to bring up the name of the volatile and still polarizing name of literary figure/hero/shameless self-promoter Gabriele d'Annunzio. The array of intellectual and artistic figures who served here is impressive, including, from the Austro-Hungarian side, for example: Ludwig Wittgenstein, Friedrich Hayek, Fritz Kreisler, and Oskar Kokoschka.

Some of the most interesting figures are displayed above. Going from the top clockwise, we start with Ernest Hemingway, the most famous Red Cross volunteer in history. Even the locals, by the way, like to say he fought at Caporetto. He did not. Honest! But he was, indeed, seriously wounded on the Piave River, the post-Caporetto front line of 1918.

Soldier Giuseppe Ungaretti is now considered the most important Italian modern poet. Some of his best early work was inspired by the war. He had the distinction of serving on both the Isonzo and Marne River in France during the war.

Young Erwin Rommel's legend originates in Caporetto. I had his entire advance during the opening of the battle pointed out to me from a mountain top, so I came to appreciate his accomplishment fully for the first time. I don't know if he was truly a great general, but he was a fantastic lieutenant.

After the war, nurse and memoirist Vera Brittain made a pilgrimage to her brother's grave at Granezza on the Asiago Plateau. My visit to the simple, dignified cemetery was quite moving as was my visit to the site in Trento of the execution depicted to her left.

The guest of honor is Cesare Battisti, Italian patriot, Austrian citizen, who volunteered to serve as an Alpini officer. He made the mistake of getting captured by forces that considered him a traitor.

Last  – representing the front's aviators – we have ace Francesco Baracca of Italy, who died over the Montello in 1918. Other renowned flyers of the Italian Front included Canadian Billy Barker, VC, American Fiorello LaGuardia, and Austria's greatest ace, Godwin Brumowski.