The Centennial at the Grass Roots: Doughboy-MIA 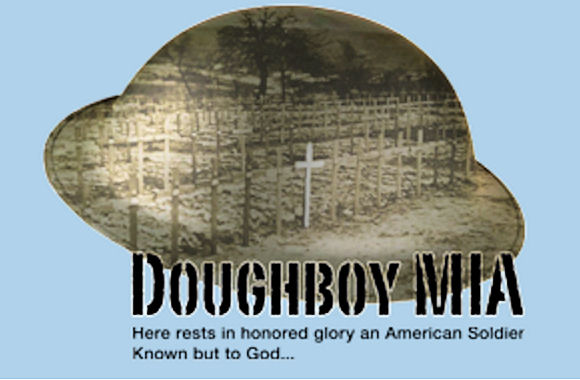 Author and historian Robert (Rob) Laplander, currently living in Wisconsin, has a lifelong passion for the study of American participation in the First World War, in particular the activities of the 1st Corps of the American 1st Army during the Meuse-Argonne Offensive.

His specific research into the "Lost Battalion" of the 77th Division spans 20 years and is by far the most extensive ever done on the battalion's behalf.  His book on the subject, Finding the Lost Battalion: Beyond the Rumors, Myths and Legend of America’s Famous WW1 Epic, has become the benchmark work on that event, for which he is recognized the world over.

Rob was also the driving force behind the Lost Battalion Memorial at Charlevaux Mills near the actual site of the heroic event in the Argonne Forest (shown on the left). Prior to its dedication in 2006, there was no on-site commemoration for the men who suffered the five-day ordeal.  Rob's body of work led to his being a featured figure in the upcoming PBS three-day television event, The Great War.

He is also the founder  of Doughboy-MIA, a  project dedicated  to tracking down  all the missing service personnel from the war (HOMEPAGE).  It is the only one of its kind to deal exclusively with that subject. Here you find nothing on America’s other wars and their casualties. Instead here you will find only information, stories, and research tools designed to investigate the American lost of WW1 as well as the most accurate and up to date list of those American soldiers, sailors, and Marines still listed as Missing in Action from the Great War.

Rob was recently interviewed by Chris Isleib of the World War One Centennial Commission in which he described the mission and some of his thoughts about the effort.

No man's or woman's sacrifice in the cause of freedom should ever be forgotten, no matter how much time has passed or whether there are living memories of them or not. These people went Over There and lost their lives, then were largely lost to history. They have remained in a shadowy area between those who came back and those who did not and remained in France. True, they are there (or at sea), but their stories are open-ended—for their families closure was denied, and all that remained for them was a name on a wall. While that was better than nothing at all, today even the names are largely forgotten. As a country we go to great lengths to recover our dead. The DPAA sends teams out to work over recoveries from WW2 on up to today—but WW1 is outside of their parameters. They simply don't have the funding, personnel or the expertise in the era to do the work. That's where we at Doughboy MIA come in. Just because it happened 100 years ago now doesn't mean we should give up. Not when the possibility still exists, which it does. Remember: A Man Is Only Missing If He Is Forgotten. We won't let them be forgotten.

Doughboy MIA is doing well.  We've submitted a report late last year to the American Battle Monuments Commission (ABMC) on a name that looks to have appeared on the list twice, and the wheels are turning on that right now. It also looks like, thanks to a reader who cares, that we've got a Navy fellow who was lost at sea very early in the war who was never placed on the list or commemorated on any of the Walls of the Missing in the cemeteries overseas or here at home. We're making our double checks now on that case before we submit it to the ABMC for consideration. And we're wrapping up the last bits on the case of a 1st Division sergeant whose remains went unlocated following the war that we've been investigating for about a year now. This is for the 1st Division Museum in Illinois. It looks as if there is the possibility that we might be able to locate him using some of today's technology. The initial report will be submitted on that early next week and at the beginning of April I will be consulting with a soil expert on the use of some of these technologies as per this case and possible others.  We still have not been able to locate the paperwork relating to the Unknowns buried overseas. Readers are encouraged to contact us if they think they may have an idea where that stuff might be, though be advised that we've combed through the "low hanging fruit" a long while ago, so what we're looking for isn't going to be in obvious places listed online. Remember: a man is only missing if he is forgotten.

If you would like to help Rob and his Doughboy MIA team or have some information that may help them at their work (especially that missing paperwork), please contact them at:   308infantry@gmail.com.