World War I Mural at the MacArthur Memorial

In 1963 the MacArthur Memorial in Norfolk, VA, began a project to complete six 7’ x 13’ murals depicting the life and accomplishments of General Douglas MacArthur. Noted artist Alton S. Tobey was commissioned to paint these after grants were received to complete the massive paintings. One of these, titled "MacArthur in the Trenches," depicts the general's service with the 42nd "Rainbow" Division in the Great War. While a few details don't quite ring true (the British Mark-series tank looks a bit out of place, and the troops were probably wearing puttees rather than leather leggings), the painting does fine justice to the Doughboys, who are trudging with fatigue but looking very determined, nonetheless. Also, MacArthur is well captured, dictating a dispatch to an aide, while looking, well, very MacArthur-like. Learn more about the murals at the memorial's outstanding website at: http://www.macarthurmemorial.org/m_m_mac_murals.asp 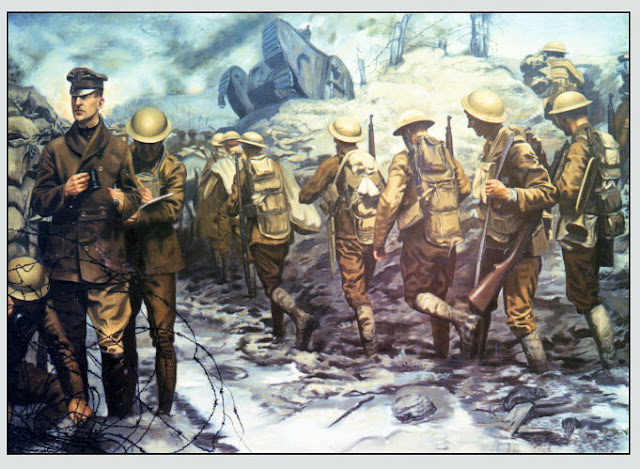 A prolific artist who created more than 500 works of art during a 60-year career, Alton Tobey was born in Connecticut in 1914 and graduated from Yale University’s School of Fine Arts. Tobey’s work was featured in numerous museum exhibits, and he completed a variety of murals all across the country. His work was published in Life, Reader’s Digest, American Artist, and Spotlight magazines.