100 Years Ago: America's First Thanksgiving in the Great War


The troops who had arrived made the best celebration they could. If it wasn't great food, apparently it was plentiful.  Here's the Thanksgiving Day meal for Company F of the 16th Engineers, Somewhere in France:

At the recently installed American Base Hospital #5 in   Boulogne, a full day's events were planned that got a little out of control.


Here on of the unit's histories records what happened that memorable day:

The first Thanksgiving in France was properly celebrated by all members of the unit. Turkey dinner with all the fixings was served in E hut. Food Controller "Pop" Steffens told everyone that "all youse need is a knife, fork and spoon, tres bon." After-dinner speeches were made by Sergeant Donovan, Butch Hall and others. When the festivities of the dinner hour were concluded an old-fashioned "horrible parade" was arranged for the entertainment of the patients. Later in the day the D.D.M.S. attempted to stop the parade in the downtown streets, because it attracted too much attention. The astonished medical director failed to account for such antics and inquired of Colonel Patterson over the telephone what sort of a holiday the men were celebrating.

As presidents do, Woodrow Wilson issued a proclamation to the nation:

By the President of the United States of America
A Proclamation


It has long been the honored custom of our people to turn in the fruitful autumn of the year in praise and thanksgiving to Almighty God for His many blessings and mercies to us as a nation. That custom we can follow now even in the midst of the tragedy of a world shaken by war and immeasurable disaster, in the midst of sorrow and great peril, because even amidst the darkness that has gathered about us we can see the great blessings God has bestowed upon us, blessings that are better than mere peace of mind and prosperity of enterprise. 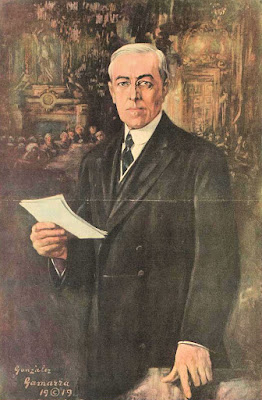 We have been given the opportunity to serve mankind as we once served ourselves in the great day of our Declaration of Independence, by taking up arms against a tyranny that threatened to master and debase men everywhere and joining with other free peoples in demanding for all the nations of the world what we then demanded and obtained for ourselves. In this day of the revelation of our duty not only to defend our own rights as nation but to defend also the rights of free men throughout the world, there has been vouchsafed us in full and inspiring measure the resolution and spirit of united action. We have been brought to one mind and purpose. A new vigor of common counsel and common action has been revealed in us. We should especially thank God that in such circumstances, in the midst of the greatest enterprise the spirits of men have ever entered upon, we have, if we but observe a reasonable and practicable economy, abundance with which to supply the needs of those associated with us as well as our own. A new light shines about us. The great duties of a new day awaken a new and greater national spirit in us. We shall never again be divided or wonder what stuff we are made of.

And while we render thanks for these things let us pray Almighty God that in all humbleness of spirit we may look always to Him for guidance; that we may be kept constant in the spirit and purpose of service; that by His grace our minds may be directed and our hands strengthened; and that in His good time liberty and security and peace and the comradeship of a common justice may be vouchsafed all the nations of the earth.

Wherefore, I, Woodrow Wilson, President of the United States of America, do hereby designate Thursday, the twenty-ninth day of November next as a day of thanksgiving and prayer, and invite the people throughout the land to cease upon that day from their ordinary occupations and in their several homes and places of worship to render thanks to God, the great ruler of nations.

In Witness Whereof, I have hereunto set my hand and caused the seal of the United States to be affixed.

Done in the District of Columbia this 7th day of November in the year of our Lord one thousand nine hundred and seventeen and of the independence of the United States of America the one hundred and forty-second.