Doughboy Basics: What Are the True Casualty Statistics for the AEF 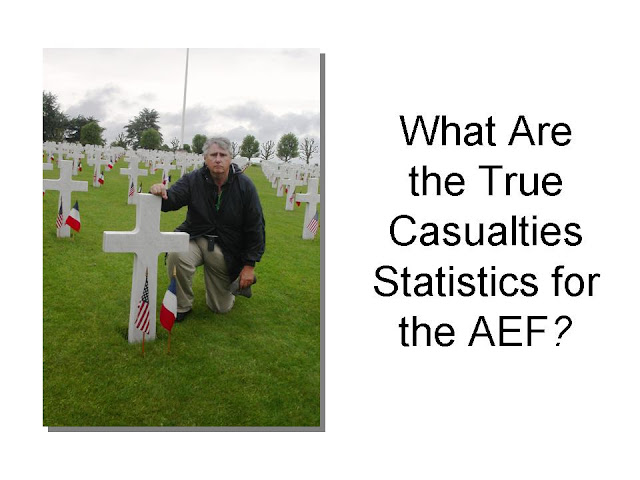 For at least the last 10 years, in my publications and public talks about the American Expeditionary Forces in that Great War, I've made the point that the statics of American killed in the war  in official sources are understated, subject to misinterpretation, and used by some historians to downplay the contribution of U.S. forces to the final outcome..  When I say "official sources" there are three Federal agencies that  publish these numbers:  the Department of Veterans Affairs, the Congressional Research Service,  and the Defense Casualty Analysis System of the Department of Defense.  They all agree on the numbers for the First World War, and they array the numbers in a  fashion similar to the format as they use for all of the nation's wars, although sometimes with different notations. Below is the VA's version of the numbers with reference points for my ensuing discussion in brackets [ ].

[1]  "Non-Theater" is simply an error. Nearly 30,000 of this number were in the combat zones. About 82,000 to 83,000 of the Americans deployed overseas died in or en route to the European  or Russian Theaters in WWI.  My estimate is derived from the American Battle Monument Commission's records of how many individuals are buried or remembered as missing in their European cemeteries (35,429) vs. the number that families chose to have returned home for burial (46,000 to 47,000).  This latter figure is my own rough estimate, since there is no authoritative list of all the Americans, who died in the war.  (But help is on the way to pin down all these numbers more precisely and to develop a master ROLL OF HONOR listing all the American fallen in the war. More on this below.)

[2]  This grand total of those in uniform does not make clear how many of these men were deployed to the war's fighting zones. This contributes to some misinterpretations about where the wartime deaths occurred. For instance, a major confusion over American deaths in the war revolves around the Spanish Influenza Pandemic. A significant source of WWI casualties was the military training establishment stateside, where over 2 million men were still training for deployment overseas when the  Armistice occurred.  These camps would be the largest source of the 46,000 American military killed by the Spanish Influenza during the war.  And a question which follows is the extent of the flu casualties at home vs. on the battlefields.  It's only by anecdotal evidence and accounts that one can infer that the larger share of these deaths were stateside rather than overseas.

[3] These categories suggest that  the first number includes all the people that were killed fighting and that the "Other Deaths" were all due to non-combat issues, such as illness, accident, or suicide. This breakdown works for the men in the camps back home, since there was no combat involved, but it does not allow for cases such as these for the troops who saw combat.:

a.  A wounded man is successfully treated for his wounds, but develops an infection in the hospital and dies afterward. (battle or other?)

b. A soldier is gassed (71,345 Doughboys were gassed) and later develops flu (which attacked respiratory systems) and dies.  (battle or other?)

c.  After the front moves on, an engineer clearing the battlefield is killed "accidentally" by a previously unexploded shell.  (battle or other?)

[4]  These significance of these 1917-1918 dates are expanded upon in one of the accompanying notes:  "Includes air service. Battle deaths and wounds not mortal include casualties suffered by American forces in northern Russia to August 25, 1919, and in Siberia to April 1, 1920. Other deaths cover the period from April 1, 1917, to December 31, 1918."   In plain words, these compilations ceased counting any deaths (except for the men in Russia) after 31 December 1918.  This, of course,  excludes counting anyone who died of their wounds or war connected illness afterward.

These figures–by my understanding–leaves out  anyone who died of wounds after the cut-off date. Recall, the hero of Little Round Top, Joshua Lawrence Chamberlain, died of his war wounds in 1914, 49 years after the end of the Civil War.  Surely there were a significant (maybe huge) number of soldiers who died of wounds after leaving the service for both the Civil War and Great War. Maybe tracking down comprehensive data about such cases is simply impossible.  However, the accounting problem for the First World War has an error compounding factor. It has a sub-category of war wounded that exists for NO OTHER American wars — Gas Casualties. See [3]a above.  Fully 1/3 of the "Non-Mortal Woundings Category (71,345 of 204,002) suffered from gassing and survived past the 31 December 1918 statistical cut-off date.  Interestingly, only 1,462 deaths from gassing during the war were reported by the AEF's Surgeon General.

I am convinced after reading or being informed of dozens of cases of WWI veterans, who were gassed and later died premature deaths due to respiratory illness, that this is an ignored category of major losses that is unrecognized and, therefore, not included in casualty summaries.  The most famous such case is baseball great Christy Mathewson, who was gassed in a drill during the war and contracted tuberculosis and died after his return home.  I know such evidence is anecdotal and there are lots of potential statistical fallacies I can fall into, but I believe these numbers to be significant.

So, what is then answer to the question raised at the opening, "What Are the True Casualty Statistics for the AEF?"

My answer is that they cannot be finally determined exactly, but what has been presented as the final word on the matter needs a lot qualification.

1.  Forget about the Battle Deaths vs Other Deaths division. The distinction is foggy at best, and for the Great War, is further complicated by the singular use of gas as a weapon and by the Spanish Influenza.

2.  For historical clarity the more important distinction is Overseas vs. At Home.  The lives of the men who died stateside were just a precious as those who died on the Western Front.   It is important, however, to accurately report the degree of sacrifice of the AEF and the intensity of the fighting and adversity they faced.  I recall a documentary "talking head" saying something very close to: "Well the Americans didn't make much of a dent militarily in the war, they only lost 53,000 men, versus the millions of the other combatants."  (Forgive my imperfect memory, but I think I represent his point accurately.)  My response to him would be: "Well  professor, actually they lost over 80,000 men, mostly in the last six months of the  war when it was at its most desperate. And, by the way, they lost another 30,000+ back home who were getting ready to go Over There to fight but weren't needed.

3.  The postwar deaths from war-related causes, are by now probably undiscoverable, but should not be ignored. Possibly this is a structural issue in the way that America reports deaths in all its war. But, my instincts—for whatever they're worth tell me this could be an especially significant figure for the Doughboys.

To redo the table above in my style:

* Deaths due to service-connected wounds, illness, injury
after 31 December 1918  not included in most cases

Note:  The photo at the top of the page is of your editor at the grave of Nurse Helen Fairchild at the U.S. Somme Cemetery, Bony, France.

Postscript:  Help Is On the Way 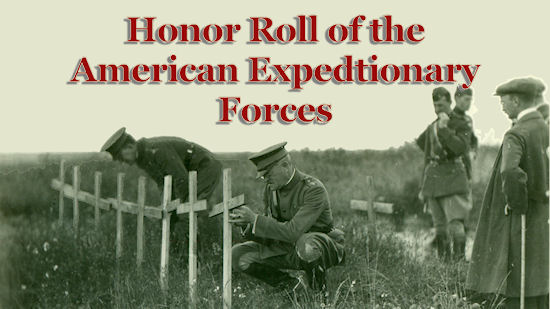 San Antonio based author and World War One historian Scott R. Schoner is completing a 20-year project that will honor the men and women of the American Expeditionary Forces (A.E.F.) who made the ultimate sacrifice for our country. This listing of the  80,000+/- overseas war dead will span 3 volumes, and will be the first comprehensive record of its kind ever published. Previously prepared typewritten lists by the U.S. Army following the war were never published, and these lists also omit the sacrifices of the nearly 3,000 U.S. Marines who died in service in the 4th Marine Brigade, fighting alongside their Army compatriots. Schoner’s work will finally publish the names, units and dates of death of all known fatalities of the A.E.F.

With the centennial upon us, Scott is trying to get this work into print, and has launched a Kickstarter campaign to get some funding help.  Below is a link.  Please consider making a contribution to make this invaluable work available to research facilities and the American Public.
https://www.kickstarter.com/projects/1536334560/honor-roll-of-the-american-expeditionary-forces?ref=dwsces