Recommended: T.E. Lawrence and the Forgotten Men Who Shaped the Arab Revolt

By Philip Walker
At OUPblog of Oxford University Press


[Some readers have asked me why we are recommending works from other blogs with greater frequency, some of which are just irresistibly interesting.  As it turns out, I'm getting more and more recommendations from our readers and editorial team.  This article was discovered by our contributing editor Tony Langley.]

T. E. Lawrence, known as “Lawrence of Arabia”, has provoked controversy for 100 years. His legend was promoted in the 1920s by the American Lowell Thomas’s travelogue, renewed in 1935 through his book Seven Pillars of Wisdom, and revived in 1962 by the epic film Lawrence of Arabia. The hype should not blind us to the fact that Lawrence’s contribution to the Arab Revolt of 1916–18 against the Turks was indispensable. His skills in organizing and coordinating, his daring and courage, his intuitive grasp of guerrilla warfare and how to harness it, his influence over Emir Feisal (the leader of Arab forces in the field), and his talent for manipulating his own leaders if necessary, were all crucial to the hollow success of the revolt. 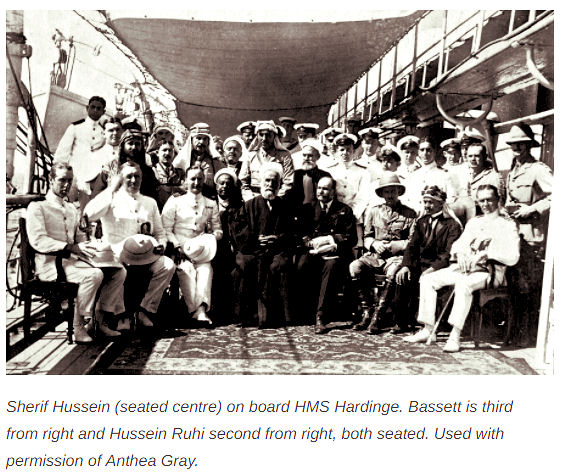 Yet Lawrence was a team player. In particular, there was a nexus of influence over the revolt that has stayed below the radar. While Lawrence and other British, Arab, and French officers were blowing up the Hejaz Railway, a forgotten band of British officers at Jeddah, far from the desert campaign, carried out vitally important diplomatic and intelligence work that prevented the revolt from collapse. This untold story centres on Colonel Cyril Edward Wilson, the British representative at the Jeddah Consulate. Wilson was a dependable officer of the old school—the antithesis of the brilliant and mercurial Lawrence. But his strong relationship with Sherif Hussein of Mecca, the leader of the revolt, drew this suspicious and controlling man back from the brink of despair, suicide, and the abandonment of the revolt. Wilson’s undervalued influence over Hussein during critical phases of the revolt was at least as important as the well-known influence of Lawrence over Emir Feisal, Hussein’s son.

Wilson’s core team included Captain Norman Bray, a highly strung Indian Army intelligence officer who rooted out anti-British and anti-Hussein jihadists. These men were incensed that Hussein dared to rebel against the Turkish sultan, who was also the caliph (leader) of all Sunni Muslims. The stakes were high because the jihadists based at Jeddah and Mecca wanted to discredit both Hussein and the British by disrupting the Hajj—the Muslim pilgrimage—and encourage Indian pilgrims (passing through Jeddah on their way to Mecca) to rebel against British rule in their homeland. Bray helped keep the revolt on course by neutralizing the jihadists, with the aid of a resourceful Persian spy named Hussein Ruhi, and had their leader deported to prison in Malta.

Ruhi is one of the most intriguing and influential players in the Arab Revolt. His cover was as Wilson’s Arabic interpreter, and he did invaluable intelligence work for the colonel in other respects too— even at times putting his life in danger.

Wilson’s two deputies, both with intelligence backgrounds, helped him with vital diplomatic work. In the colonel’s absence, the eccentric, half-deaf Major Hugh Pearson helped steady Hussein when he lost his nerve. Later, the genial and imperturbable Colonel John Bassett stood in for Wilson while he spent five months recovering in Cairo from life-threatening dysentery. Bassett encouraged and cajoled Hussein when Hussein fell out with his son Feisal, resigned as King of the Hejaz, spoke of suicide, and threatened to withdraw all of Feisal’s Bedouin tribesmen from the planned advance into Syria. If those fighters had returned to the Hejaz (Hussein’s territory) the revolt would have dissolved.