I was looking through my folder of WWI tank images and came across many of damaged tanks, especially of British Mark-Series vehicles. The two shown here with the dead crew members were especially affecting. This led me to do some searching for information on the hazards of serving on tank crews. The best material I could find was The Long, Long Trail website article "The Tank Corps of 1914–1918." It turns out that it wasn't just enemy fire that was dangerous for the men aboard. 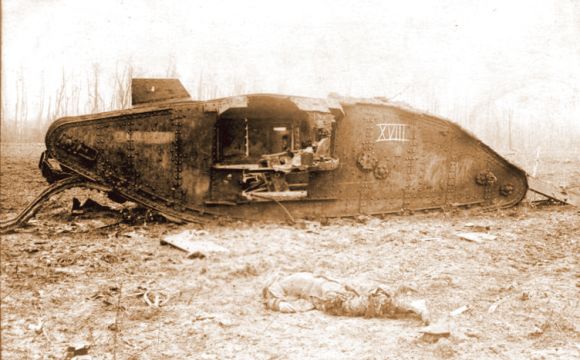 At best, the early tanks could achieve a top speed of 4 miles per hour. On the battlefield this was rarely realized, and in many cases infantry moved far faster. The machines were crewed by a subaltern, three drivers, and four gunners, of which one was an NCO. Interior conditions were truly appalling, being a combination of intense heat, noise, and exhaust from the engine, violent movement as the tank crossed the ground and molten metal splash as bullets struck the plating. Men would often be violently sick or badly incapacitated by the conditions and were often in no fit state to continue after quite short journeys. It was difficult to communicate within the tank and with men and other tanks outside. The tank officer often had to get out and walk, to reconnoiter his path or to work with the infantry. The tanks also proved to be mechanically unreliable and vulnerable to shellfire. Some tanks carried a wire frame on the roof, designed to deflect grenades. 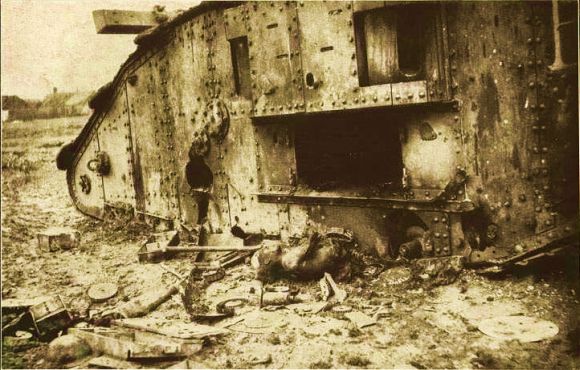 [At the Battle of Amiens] in conjunction with the new artillery and infantry tactics [the 450 tanks assembled], proved to be useful in crushing wire, overrunning machine gun posts and strong points, and helping infantry through the streets of destroyed villages. However, tank losses were significant and within days of the initial assault the Tank Corps was a temporarily spent force. It was not until the assaults on the Hindenburg Line in late September 1918 that a large enough force had been assembled again. From 21 August 1918 to the Armistice on 11 November 1918, some 2,400 men and officers of the Tank Corps became casualties.