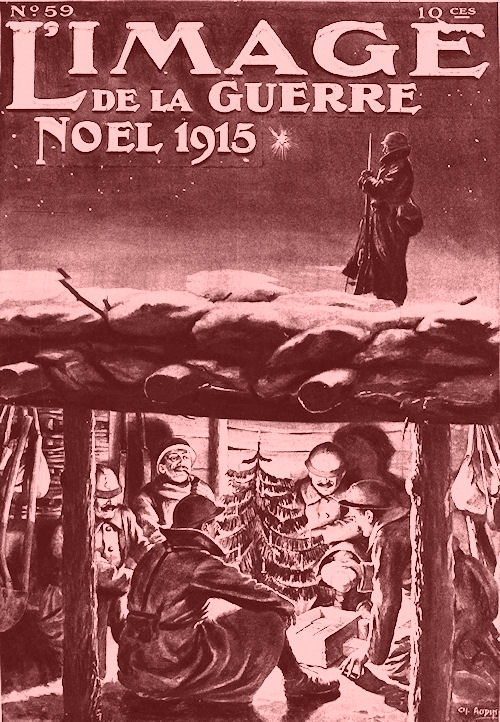 One story from World War I is so dramatic and moving that it's the only holiday episode that has stayed the public's consciousness.. That tale, of course, is of the famous Christmas Truce of 1914. But how were the subsequent Christmases celebrated? The 1914 Truce had one traumatic impact—it horrified the generals and their staffs on both sides, and they worked hard subsequently at discouraging such fraternizing. However, there were more incidents in later years [albeit smaller in scale]. The tradition of gift giving, on the other hand, was encouraged, even institutionalized, by the governments of the combatants. The soldiers themselves found their own ways to celebrate: decorating the trenches, having special meals, caroling, exchanging "joke" gifts with their mates, and so forth.

Here are some Christmas reports from troops at the front.


On Christmas Day we were in the firing line and were served one slice of pudding and seven dates. But it was so cold and we were always wet.
Joe Clement, Royal Marines
Gallipoli, 1915


Now it's Christmas for the second time in this war...And here I am alone with my tree in a small trench. Some candles are fixed on the branches and an old steel helmet.
Ernst Bergner, German Army
Flanders, 1915 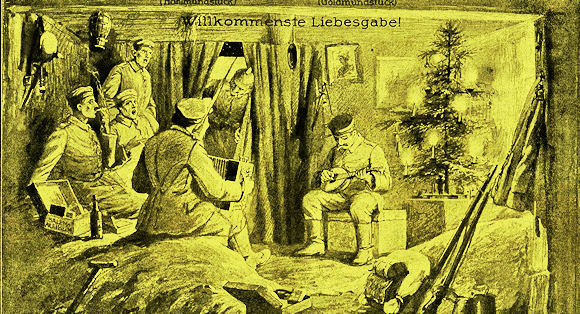 Christmas and New Year were celebrated by the companies with great festivities at which beer and grog flowed in rivers. There were exactly four men left in the 2nd Company who spent the previous Christmas with me in the line before Monchy...."
Ernst Jünger, German Army
Somme, 1916


We had our Christmas dinner in Albert in an old sewing machine factory. We had beer for our dinner - plenty of it - and a good tuck-in to go with it! Roast pork! Beautiful after bully beef!
C.H. Williams, British Army
Somme, 1916


Christmas time on the island was happy. The boys hung up their socks, and I had to sneak round at 3 am and fill them with toys and sweets. Two men saw me and said Father Christmas had a white cap and gown on. There was great excitement in the morning.
Sister Evelyn Davies
3rd Australian General Hospital, Lemnos, 1915 At the spontaneous request of the officers and men, I shall be saying midnight mass in the village church very beautifully decorated by the daughter and son from the château, with whose help, too, I have been able to teach the men some carols...what more do we need to forget for a few moments the war and the trenches...this Christmas gives me the opportunity for me to appear openly as a priest.

Stretcher Bearer & Jesuit Priest Pierre Teilhard de Chardin
French Army, 1915
[Under anti-clerical laws, French priests could not serve as chaplains but were obliged to serve in the military.]