Hitting the Beach at Anzac


As we neared the peninsula of Gallipoli, the Captain of the Destroyers gave the order for silence and for the men to stop smoking. And thus in the darkness and in silence we were carried towards the land which was to either make or mar the name of Australia. On either side we could dimly see other destroyers bearing the rest of the Third Brigade. I am quite sure that very few of us realized that at last we were actually bound for our first baptism of fire, for it seemed as though we were just out on one of our night manoeuvres, but very soon we realized that it was neither a surprise party nor a moonlight picnic.

I turned around to get the second tow ready, when a man just in front of me dropped, hit in the head. This was the first casualty and very soon there were several others hit. There was some difficulty in getting the second tow ready but eventually when a naval cutter came alongside we got in and started for the beach; three men were hit before the boat struck the shore. When she hit the beach, I gave the word to get out and out the men got at once, in water up to their necks in some cases, men actually had to swim several strokes before they got their footing. It was almost impossible to walk with full marching order, absolutely drenched to the skin and I fell twice before I got to the dry beach where I scrambled up under cover of a sand ridge. I ordered the men to dump their packs off, load their rifles, and waited a few seconds for the men to get their breath.
[Captain I S Margetts, Diary, 25 April 1915, AWM 1 DRL/0478]


Odd parties of the 11th and 12th Battalions were scrambling up these gravelly and almost perpendicular crags by any foothold which offered...One of this party, Corporal E W D Laing… clambering breathless up the height, came upon an officer almost exhausted half way up. It was the old Colonel—Clarke of the 12th Battalion. He was carrying his heavy pack, and could scarcely go further. Laing advised him to throw the pack away, but Clarke was unwilling to lose it, and Laing thereupon carried it himself. The two climbed on together, and Margetts…reaching the top, found to his astonishment the Colonel already there.
[C E W Bean, The Story of Anzac, Sydney, 1924, Vol I, p.272] 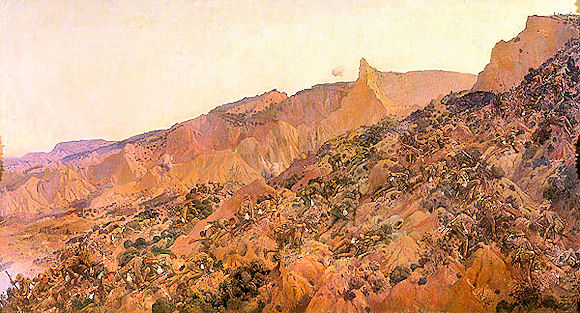 Hanging in the Gallipoli gallery of the Australian War Memorial is one of the best-known Australian war paintings—George Lambert’s Anzac, the landing 1915. Depicted in the centre of the painting are Australian soldiers, crawling and scrambling their way up a steep, scrubby cliff. Some have been killed, some lie wounded, while others press on towards the heights where the growing daylight shows up distant, shadowy figures of the enemy above. Lambert has caught on canvas the struggle of Western Australians of the 11th Battalion, Australian Imperial Force (AIF), as they made their way up towards Plugge’s Plateau from where they had been put ashore on North Beach. In the painting, the Sphinx is beginning to catch the first light of day as the men climb in the shadow of the western side of ‘Plugge’s’. This is the dawn rush of the first wave of Australians as described to Lambert by Lieutenant Hedley Howe who, as Lance-Corporal Howe, had taken part in the landing.