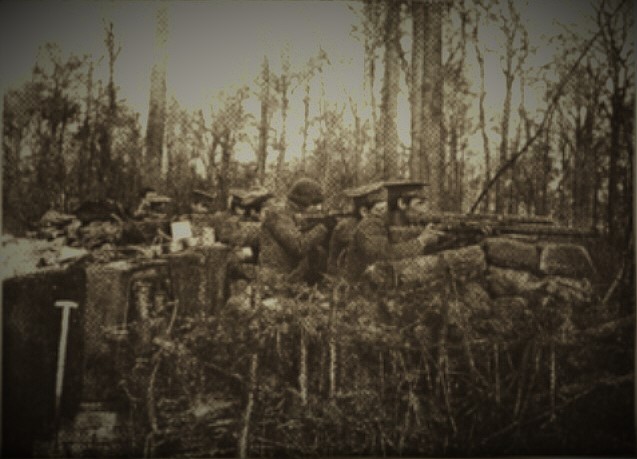 “A good standing trench was about six foot deep, so that a man could walk upright during the day in safety from rifle-fire. In each bay of the trench we constructed fire-steps about two feet higher than the bottom of the trench, which enable us to stand head and shoulders about the parapet. During the day we were working in reliefs, and we would snatch an hour’s sleep when we could, on a wet and muddy fire-step, wet through to the skin ourselves.

“If anyone had to go to the company on our right in the daytime he had to walk through thirty yards of waterlogged trench, which was chest deep in water in some places.”
Frank Richards 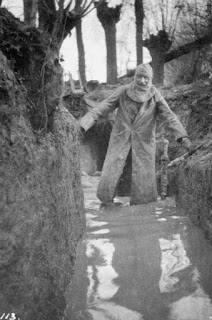 “It was a long and weary night, that first one of mine in the trenches. Everything was strange, and wet and horrid. First of all, I had to do and fix up my machine guns at various points, and find places for the gunners to sleep in. This was no easy matter, as many of the dugouts had fallen in and floated off
downstream.

“In this, and subsequent descriptions of the trenches, I may lay myself open to the charge of exaggeration. But it must be remembered that I am describing trench life in the early days of 1914. And I feel sure that those who had experience of them will acquit me of any such charge.

“To give a recipe of getting a round idea, in case you want to, I recommend the following procedure. Select a flat ten-acre ploughed field, so sited that all the surface water of the surrounding country drains into it. Now cut a zig-zag slot about four feet deep and three feet wide diagonally across, dam off as much water as you can so as to leave about one hundred yards of squelchy mud; delve out a hole at one side of the slot, then endeavor to live there for a month on bully beef and damp biscuits, whilst a friend has instructions to fire at you with his Winchester every time you put your head about the surface.”
Bruce Bairnsfather 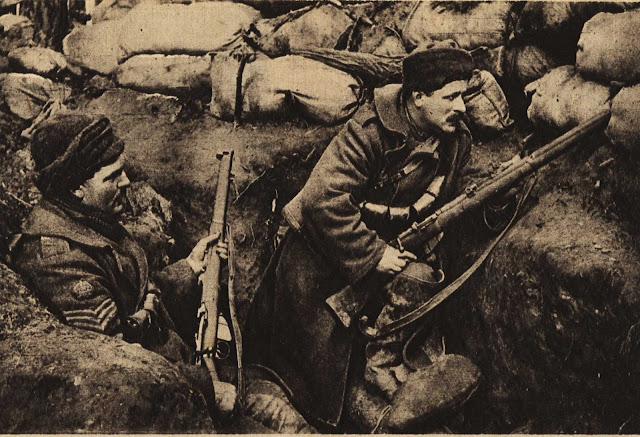 “It was 9 A.M. and the so-called trench was full of corpses and all sorts of equipment. We stood and sat on bodies as if they were stones or logs of wood. Nobody worried if one had its head stuck through or torn off, or a third had gory bones sticking out though its torn coat. And outside the trench one could see them lying in every kind of position. There was one quite young little chap, a Frenchman, sitting in a shell-hole, with his rifle on his arm and his head bent forward, but he was holding his hands as if to protect himself, in front of his chest in which there was a deep bayonet wound. And so they lay, in all their different positions, mostly Frenchmen, with their heads battered in by blows from mallets and even spades, and all around rifles, equipment of all kinds and any number of kepis. The 154th had fought like furies in their attack, to revenge themselves for the shellfire.

“A heap of five corpses lay just this side of the barrier; we were constantly having to tread on them to try to squash them down in the mud, because, in consequences of that gunfire, we couldn’t get them out of the trench. Our feeling gradually became quite blunted.”
August Hope

Source: "Life in the Trenches," historylearningsite.co.uk.