The name Henry A. Wise Wood may not ring familiar, but this inventor, businessman, writer, and activist was instrumental in the debate—and ultimate defeat—of American entry into the Covenant of the League of Nations. He made his fortune as president and chairman of the Wood Newspaper Machinery Corporation. In a sense he literally helped accelerate the rise of the penny press: his numerous advancements, including the Autoplate, allowed newspapers to come off the line at a rate of 60,000 per hour, more the twice the rate of 24,000 per hour it had been previously. He also had a keen interest in both aeronautics and submarines and was one of the first to understand how transportation and communications technology would come together in 20th-century warfare. Wood was the first president of the American Society of Aeronautical Engineers. He was a member of the Aero Club of America and in 1911 founded and edited Flying, a magazine dedicated to that nascent field. He was also a published poet.

Given this background and history, then, it is not surprising that Navy Secretary Josephus Daniels invited Wood to join the United States Naval Consulting Board, a civilian advisory body Daniels created in September 1915 whose purpose was to evaluate the efficacy of the numerous technological ideas pitched by a concerned public to the Navy Department now that war had come to Europe. Thomas Edison served as president of the Naval Consulting Board, which was comprised of the country’s leading inventors, scientists, mathematicians, engineers, and business figures. Wood resigned by year’s end in frustration over what he believed was the Wilson administration’s unwillingness to ready Americans for war. Henry A. Wise Wood was not the first in his family to publicly disagree with a presidential administration about how best to handle armed conflict. His father was Fernando Wood, the New York City mayor (and later congressman) who half a century earlier had tangled with President Lincoln during the American Civil War. Henry was born in March 1866, less than a year after Appomattox. 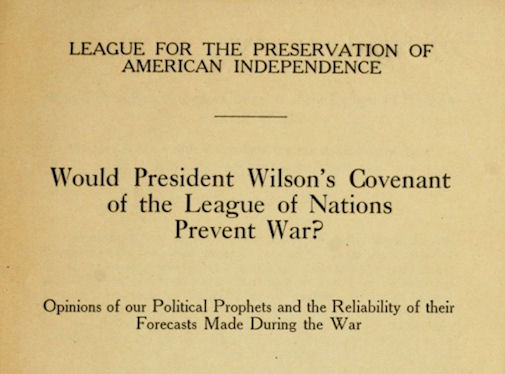 After his disillusionment with the Consulting Board experience, Wood joined Theodore Roosevelt and others in the Preparedness Movement, soon becoming chairman of the Conference Committee on National Preparedness. He left the Democratic Party and supported Charles Evans Hughes against Wilson in 1916. Wood noisily criticized the Wilson administration even after the America joined the fight the following year. When the Armistice came he was naturally anxious to see what the peace might look like. Wood began his opposition to Wilson’s proposal as early as February 1919, though he refrained from criticizing Wilson publicly while the president was in Europe. Theodore Roosevelt was gone by this time, but Wood and others carried on the fight in his spirit. By early March 1919 he and his associates formed a group called the League for the Preservation of American Independence with a kick-off at the Hotel Pennsylvania. Numerous senators, including Senators Henry Cabot Lodge and Warren G. Harding, sent messages of support. They opened an office at 1 Madison Avenue and Independence League branches quickly opened in other cities across the country.

Henry A. Wise Wood let his opinions about the League of Nations be known through numerous speeches and letters to editor, including via vehicles as the New York Times, whose presses ran on machines designed largely by Wood himself. Wood even pushed for Wilson’s impeachment. He also debated League of Nations supporters in public venues, including a face-off with New Jersey politician and businessman Everett Colby in East Orange in April 1919. On 28 June Wood’s League for the Preservation of American Independence organized a sold-out event at Carnegie Hall featuring senators James A. Reed (D-MO) and Hiram Johnson (R-CA), the latter previously a founder of the Progressive Party and 1912 running mate of Roosevelt’s on the national Bull Moose ticket. Hundreds stood on the sidewalk outside, unable to get in but eager to make their opinions known through their presence. Hiram Warren Johnson in particular was never one to hold his feelings back either publicly or in private. Writing in a letter to his children on 31 May 1919, the California senator had declared that “I firmly believe [the League of Nations] to be the most iniquitous thing presented at least during my lifetime.” He electrified the Carnegie Hall crowd.

Debate over American entry into the League of Nations continued all summer. In late August Wood and other members of the Independence League wrote an open letter to all U.S. senators laying out their concerns. On 25 September 1919 Wood telegraphed Wilson, who was then in Wichita, Kansas, exhausting himself on his whistle-stop tour in promotion of the League of Nations. Wood averred to Wilson in that missive that opposition to the the League of Nations, contrary to Wilson’s public utterances, extended beyond just various congressman and “hyphenated Americans,” a term for naturalized and first generation ethnic citizens. Wood’s telegram came at a stressful time for the president. The grind of this tour—Wilson covered more than 8,000 miles in just over three weeks—contributed to the debilitating stroke he suffered on 2 October.

Still, even with the president incapacitated the debate raged on. Senator Johnson spoke to several hundred at a luncheon sponsored by the Los Angeles branch of the League for the Preservation of American Independence in that city on 3 October, the day after Wilson’s stroke. Johnson’s talk was held in the same hotel ballroom where Woodrow Wilson had spoken in favor Senate ratification just two weeks previously. Later that very night Senator Johnson spoke to an audience of 7,000 persons further explaining his disapproval with the Versailles Treaty. A culmination of sorts came on 18 October 1919 when a crowd of 10,000 attended a League for the Preservation of American Independence rally at New York City’s Madison Square Garden, then on 26th Street and Madison Avenue. The United States Senate rejected the Treaty of Versailles the following month on 19 November. Wilson’s beloved treaty was not entirely dead; the debate would go in for some time. The momentum however had turned inexorably against the president. Wood remained part of that argument and then went on to other pursuits in the 1920s, including continuing with his profitable newspaper machinery business, scientific and technological interests, and reactionary advocacy for such causes as immigration restriction. He lived long enough to see the rise of Hitler and such events as the annexation of Austria in March 1938 and invasion of Czechoslovakia twelve months later. The second global war that Wood and others had predicted two decades previously was at hand. Henry A. Wise Wood died at his home on Fifth Avenue adjacent to Central Park on 9 April 1939 and is buried today at Mount Adnah Cemetery in Annisquam, Massachusetts.

Keith Muchowski, a librarian and professor at New York City College of Technology (CUNY) in Brooklyn, writes occasionally for Roads to the Great War.  [This is Keith's 14th article for us. MH] He recently finished a manuscript about Civil War era New York City.
Keith blogs at thestrawfoot.com.