The U.S. Coast Guard's Service in the Great War 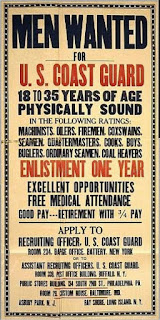 The outbreak of World War I (WWI) in 1914 saw cutters become responsible for enforcing U.S. neutrality laws. Soon after, in January 1915, these cutters and their officers and crews merged with the U.S. Life-Saving Service to become the Coast Guard. The Coast Guard was specifically created as an armed service of the U.S. and was directed to transfer to the Navy in the event of war or upon direction by the president. Plans were immediately put into place to work carefully with the Navy in determining what roles the Coast Guard might play in any future conflict. Those plans were implemented quickly with the U.S. declaration of war against Germany on 6 April 1917. At that time, a coded dispatch was transmitted from Washington, D.C., via the Navy radio station in Alexandria, VA, to every Coast Guard cutter and shore station. Officers, enlisted men, vessels, and units were transferred to the operational control of the Department of the Navy. The Coast Guard augmented the Navy with its 223 commissioned officers, more than 4,500 enlisted men, 47 vessels of all types, and 279 stations scattered along the entire U.S. coastline.


During WWI, the Coast Guard continued to enforce rules and regulations that governed the anchorage and movements of vessels in American harbors. The Espionage Act, passed in June 1917, gave the Coast Guard further power to protect merchant shipping from sabotage. This act included the safeguarding of waterfront property, supervision of vessel movements, establishment of anchorages and restricted areas, and the right to control and remove people aboard ships. The tremendous increase in munitions shipments, particularly in New York, required an increase in personnel to oversee this activity. The term “captain of the port” (COTP) was first used in New York, and Captain Godfrey L. Carden was the first to hold that title. As COTP, he was charged with supervising the safe loading of explosives. During the war, a similar post was established in other U.S. ports. However, the majority of the nation’s munitions shipments abroad left through New York. For a period of one-and-a-half years, more than 1,600 vessels, carrying more than 345 million tons of explosives, sailed from this port. In 1918, Carden’s division was the largest single command in the Coast Guard. It consisted of more than 1,400 officers and men, four Corps of Engineers tugboats, and five harbor cutters.

In August and September 1917, six U.S. Coast Guard Cutters (USCGC), Ossipee, Seneca, Yamacraw, Algonquin, Manning, and Tampa, left the United States to join U.S. naval forces in European waters. They constituted Squadron 2 of Division 6 of the patrol forces of the Atlantic Fleet and were based in Gibraltar. Throughout the war they escorted hundreds of vessels between Gibraltar and the British Isles. The other large cutters performed similar duties in home waters, off Bermuda, in the Azores, in the Caribbean, and off the coast of Nova Scotia. They operated either under the orders of the commandants of the various naval districts or under the direct orders of the Chief of Naval Operations. One cutter, Tampa, was lost in combat with all 115 crew and 15 passengers aboard, a dreadful loss for such a small service.


NAVAL COMMAND
A large number of Coast Guard officers held important commands during WWI. Twenty-four commanded naval warships in the war zone, five commanded warships attached to the American Patrol detachment in the Caribbean Sea, twenty-three commanded warships attached to naval districts, and five Coast Guard officers commanded large training camps. Six were assigned to aviation duty, two of whom commanded important air stations including one in France. Shortly after the Armistice, four Coast Guard officers were assigned to command large naval transports engaged in bringing the troops home from France. Officers not assigned to command served in practically every phase of naval activity: on transports, cruisers, cutters, patrol vessels, in naval districts, as inspectors, and at training camps. Of the 223 commissioned officers of the Coast Guard, seven met their deaths as a result of enemy action.

LOSSES & AWARDS
Besides those lost aboard USCGC Tampa, eleven were lost from USCGC Seneca on a combat search-and-rescue mission, and another 70 lost their lives due to accident or illness. Two cutters were lost due to collisions, USCGC McCulloch off San Francisco and USCGC Mohawk off Sandy Hook. Heroism was common among Coast Guardsmen as they were awarded two Distinguished Service Medals, eight Gold Life-Saving Medals, 49 Navy Crosses, and 11 foreign awards.

BACK TO PEACETIME
U.S. Coast Guard Chief Historian Scott Price described what happened to the service after the Armistice. "The biggest challenge was to get the Coast Guard back under the Treasury Department—many of the Coast Guard officers liked serving with the Navy, since there were better chances at promotion, etc. so that was one hurdle that had to be surmounted. And before they had a chance to really incorporate the lessons they learned during the war, the nation undertook the great experiment that was Prohibition and so once again we were thrust into a huge new task, one unlike anything we had done to that time, and that consumed the Coast Guard for the next decade or so. But lessons were learned and by the time World War II came around, our escort-of-convoy and port security duties were still paramount—as well as our coastal defense responsibilities."