Afghanistan and the Forming of the Triple Entente 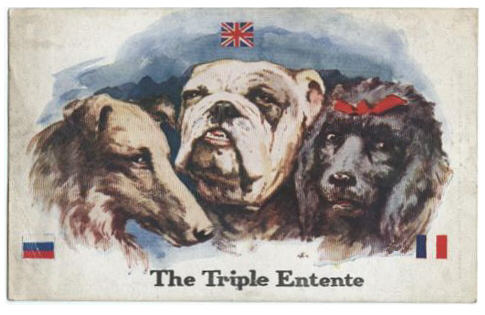 The Liberals took office in Great Britain in December 1905. On 13 December Foreign Minister Edward Grey assured Benckendorff, the Russian ambassador, that he was in favor of an agreement with Russia. Sir Arthur Nicolson arrived in St. Petersburg as the new British ambassador on 28 May, having 'talked entente in and out, up and down' with Grey, Chancellor of the Exchequer Herbert Asquith and Lord John Morley, Secretary of State for India, before leaving London. Formal negotiations were launched on 7 June. The Russians were far more willing to  receive overtures than they had been in 1905. The appointment of Aleksandr  Izvolskii to the Russian Foreign Ministry signified a turn from Asian adventures and a renewed interest in the Balkans and European problems. However Izvolskii was to have similar troubles with the military in Russia, and for similar reasons, as Grey had with the Government of India.

The negotiators had overlapping objectives. Russia wished to strengthen its hold on its Asiatic empire without fear of British interference. The British wish to maintain a cordon sanitaire around its imperial crown jewel, India.

The negotiations turned out to be long and difficult and were more than once on the point of breaking down completely. All three areas concerned—Persia, Afghanistan, and Tibet, were interwoven during the discussions and there were long periods of quiescence. From the 21st century view, of these, dealing with Afghanistan would prove the trickiest and central issue.

It was with Afghanistan that the Government of India was chiefly concerned, as Kitchener's memorandum raising alarm about Russia's intentions indicated. Relations between Great Britain and Afghanistan were peculiar. The external relations of Afghanistan had been under British control for the last twenty-five years and Britain was pledged by treaty to safeguard the integrity of the Amir's dominions. The Amir received through India money, arms and advice yet the actual situation belied this apparently close, protected-protector relationship. No British or Indian agent was allowed to reside in Kabul, and Simla depended on an unreliable Afghan agent who was little better than a prisoner. The British  complained that they had no way of receiving reliable information about the country they were pledged to defend. The Amir refused to allow them to construct the roads, railways and telegraphs thought necessary for his defense and was not adverse to intriguing with the Russians and India's rebellious border tribes.

By 1903 the Russians had acquired a long common border with Afghanistan and were demanding contact with the Amir for the settlement of border disputes which it was difficult to refuse. They were also trying to establish a commercial agent at Kabul, and India was again worried at the difficulty of separating commerce from politics. In 1905 the Dane mission was sent from India to impress the new Amir, and a new British-Afghan treaty was signed which left Afghanistan's external relations in British hands. It remained to settle the problem of Russian contacts.

Nicolson was permitted to open negotiations on Afghanistan in September 1906 but these were delayed on his request while the more pressing problem of Persia was dealt with. Grey's draft proposals were finally submitted on 23 February 1907, once the Russian proposals on Persia made the prospect of agreement seem sufficiently good to warrant it.

The final Convention was a pacific enough looking document. The British declared that they had no intention of changing the political status of Afghanistan, and would exercise influence at Kabul in a pacific and in no way anti-Russian sense. The Anglo-Afghan treaty of 1905 was reaffirmed and Britain renounced any intention of occupying or annexing the country or of interfering in internal affairs with the saving clause; as long as Afghanistan kept her treaty commitments.

The Convention acknowledged the already existing Russo-Afghan communications over local issues by the frontier officers of both sides, and established the principle of the Russian right to equality of trading opportunities and facilities with the Indians in this region. Both these were to furnish cause for future difficulties.

Both sides regarded the Convention regarding Afghanistan as by no means the least important part of the whole entente, especially as it would be the section most noticed by the general public. Morley admitted to the Viceroy that 'the public will not trouble itself deeply about Tibet or even about Persia so long as the Gulf is kept in status quo. But any yielding about Afghanistan or even any contingent disturbance there will provoke, and rightly provoke, a fierce row.  Izvolskii, in an interview with Edward VII at Marienbad shortly after the entente was signed, also remarked that it was to this area that most attention would be paid in Russia.  When the accord was executed in 1907 Grey stated  it had secured 'us forever, as far as a treaty could secure us, from further Russian advances in the direction of the Indian frontier.' This was ultimately a question of faith in Russia's good intentions, and on this issue Grey's apparent optimism was not shared either by Curzon or by Curzon's successor in Delhi.

Source: November 2007 Over the Top