The answer is 45.3 miles. That is the distance from Les Mares Farm, located northwest of Château-Thierry, to the Eiffel Tower. It is the place where U.S. Marines held the line against the advancing German forces in the final stage of their third offensive of the spring, Operation Blücher. 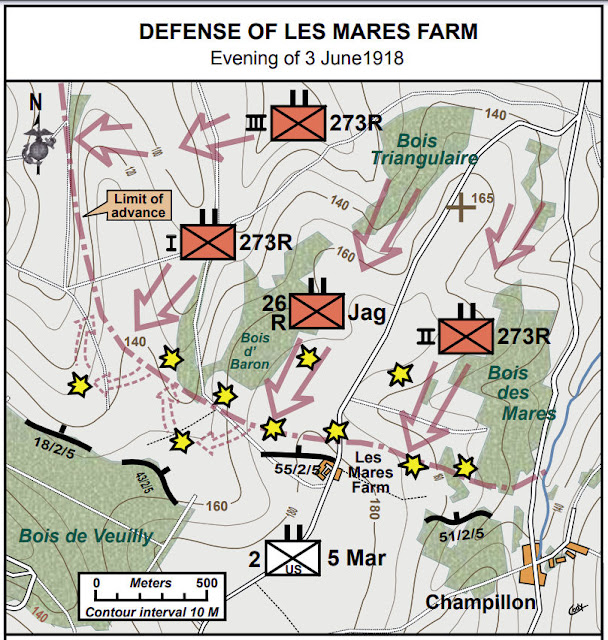 Initially, the U.S. 2nd Division units were attached to the French 43rd and 164th Divisions. Taking position as they arrived on the field and thinly spread on a front of 15 km, soldiers of the 3rd Brigade were split on both flanks, with marines of the 4th Brigade in the center. . . On 3 June, the last exhausted rear guard French elements withdrew and regrouped behind the line formed by the marines and soldiers of the 2nd Division. During the evening of 3 June, the marines of 2nd Battalion, 5th Regiment, repulsed the attack of the German 273rd Reserve Infantry Regiment, 197th Division, at Les Mares Farm; this would be as close as the German Army would get to Paris for the remainder of the war.

The  accurate, long-range rifle fire by marines of the 2nd Battalion, 5th Regiment, supported by machine guns and artillery, stopped the massed attack of the German 197th Division’s 273rd Reserve Infantry Regiment, reinforced with the 26th Reserve Jaeger Battalion, in front of Les Mares Farm. This action, plus stiffened resistance all along the Allied line, stood as the highwater mark of the German spring offensive’s Operation Blücher.