Answering the Call: Erie County, Pennsylvania in World War One. 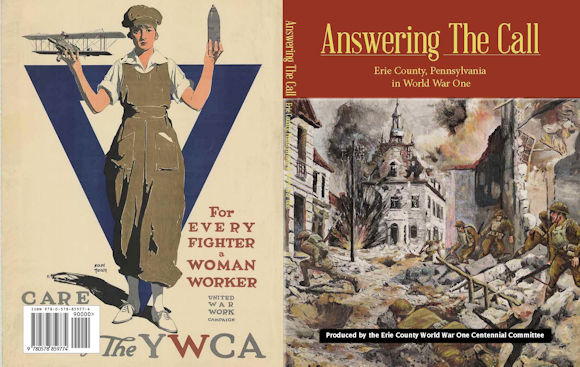 The Erie County World War One Centennial Committee was formed in August 2018 with the goal of remembering the contributions of the men and women of the county to the American effort in World War I. Their idea to create a plaque with the names of the 190 Erie County men who died in service during the war resulted in their research to find more information about the men. In addition to discovering another eleven men who made the supreme sacrifice, they accumulated enough material to make this book possible. There are several editors listed along with twenty-two contributing authors. The chief editors are: Mary Jane Phillips Koenig, Susan Bowser Mueller, Ann Silverthorn, and Bill Welch.

Answering the Call is divided into short chapters covering many different aspects of Erie County’s war effort. A brief review of some of the chapters will suffice to give the reader an idea of the scope and content of the book. Initial chapters provide an overview of the progress of the war to 1917, a brief history of the county’s involvement in the war, and an explanation of the criteria for inclusion in the list of the dead. The next chapter gives a brief vignette of each Erie County serviceman who died during the war, including a few who died while in the service of another country. Accompanying most of the vignettes is a small portrait of each man.

Subsequent chapters are devoted to vignettes of other men from the county and a brief look at units composed largely of men from Pennsylvania. These include the 28th, 79th, and 80th Divisions. A separate chapter covers the men of the 313th Machine Gun Battalion, 80th Division, and their service during the Meuse-Argonne Offensive.

The editors devote a full chapter of Answering the Call to covering the industrial support given by Erie County to the war effort; products included engines, paper (including sheet music), bombs, and boilers. Another fine section of several chapters covers the work of the women of Erie County during the war. They served in the Red Cross and other auxiliary organizations, they worked in industries, they served as nurses, and they raised money for the war effort.

A chapter covering the pilgrimage of Gold Star Mothers to Europe in the early 1930s provides a sad coda to the story of women on the home front. Other chapters cover the 1918 flu epidemic, the visit of a captured German U-Boat to Erie, the departure of Erie’s U.S. Naval Reserve men for duty in April 1917. Another chapter lists the various awards and decorations, including non-medal awards, which men and women could earn during the war; it closes with a list of eight men from Erie County who earned the Distinguished Service Cross, along with the appropriate citations. The final chapters cover the building and dedication of the Veterans Memorial Stadium to honor the county’s fallen in 1924 plus several more vignettes covering the service of specific soldiers.

The editors have included a helpful guide for genealogists, historians and others who want to research American servicemen. In addition, a complete list of the men from Erie County is included. The book is heavily illustrated with  photographs of soldiers, places, equipment, etc. It is highly recommended to those readers interested in how the war affected American communities.

For Purchasing  Answering the Call: Erie County, Pennsylvania in World War One:

·  $22 per softbound copy,  plus $5.00 shipping, with all proceeds going toward the maintenance and upkeep of the World War I memorial at Erie County Veterans Memorial Park.