(Note: Most sources I've consulted list the death rate at Western Samoa as 24%... This article, cites 22%  In any case, I think you will find it quite informative. MH) 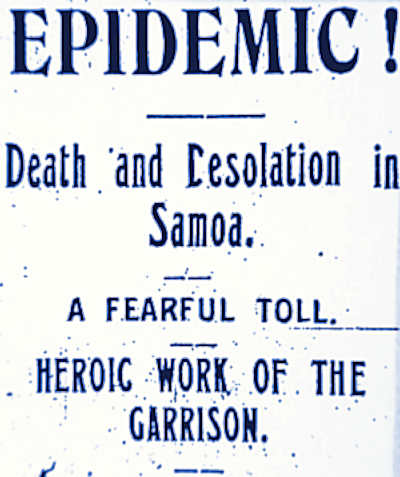 In New Zealand governed Western Samoa—not including the adjacent territory of American Samoa—30% of the men, 22% of the women, 10% of all children died from the Spanish Flu.

The  global influenza pandemic came to Western Samoa on board an island trader, the Talune, on 4 November 1918. The acting port officer at Apia was unaware that there was a severe epidemic at the ship's departure point, Auckland. On board were people suffering from pneumonic influenza, a highly infectious disease already responsible for hundreds of thousands of deaths around the world. Although the Talune had been quarantined in Fiji, no such restrictions were imposed in Samoa.

As a result he allowed passengers ashore, including six who were seriously ill with influenza. Within a week, influenza had spread throughout the main island of Upolu and to the neighboring island of Savai'i. The disease spread rapidly through the islands. Samoa's disorganized local health facilities and traumatized inhabitants were unable to cope with the magnitude of the disaster and the death toll rose with terrifying speed. Grieving families had no time to carry out traditional ceremonies for their loved ones. Bodies were wrapped in mats and collected by trucks for burial in mass graves.Approximately 8500 people—more than one-fifth of the population—died.

The influenza pandemic took a terrible toll on Samoa’s population. In a single week, the prominent businessman and community figure O.F. Nelson lost his mother, one of his two sisters, his only brother, and a daughter-in-law. S.H. Meredith lost seven close relatives. Of the 24 members of the Fono a Faipule (the colonial legislature), only seven survived the pandemic. The total number of deaths attributable to influenza was later estimated as 8500, 22% of the population. According to a 1947 United Nations report, it was "one of the most disastrous epidemics recorded anywhere in the world during the present century, so far as the proportion of deaths to the population is concerned."

Responsibility for the pandemic clearly lay with New Zealand. In 1918, Western Samoa was still occupied by New Zealand forces that had seized the German colony at the beginning of the First World War. In addition to not placing the Talune under quarantine, the New Zealand Administrator, Colonel Robert Logan, did not accept an offer of assistance from the Governor of nearby American Samoa that may have reduced the death toll.  A Royal Commission called to enquire into the allegations found evidence of administrative neglect and poor judgement. Logan seemed unable to comprehend the depth of feeling against him and his administration. He left Samoa in early 1919 and did not return. His successor, Colonel R.W. Tate (1920–23), was faced with immense grief and ongoing resentment.

The influenza pandemic had a significant impact on New Zealand's administration of Samoa. Many older matai (chiefs) died, making way for new leaders more familiar with European ways. For survivors, the incident was seared into memory. It became the foundation upon which other grievances against the New Zealand authorities would be built. In 2002, New Zealand Prime Minister Helen Clark made an official apology to the Samoan people for the actions of the New Zealand authorities. Western Samoa had become an independent republic in 1962 and in 1997 adopted the name Samoa.  The U.S. Territorial possessions in the Samoan Islands are known as American Samoa.