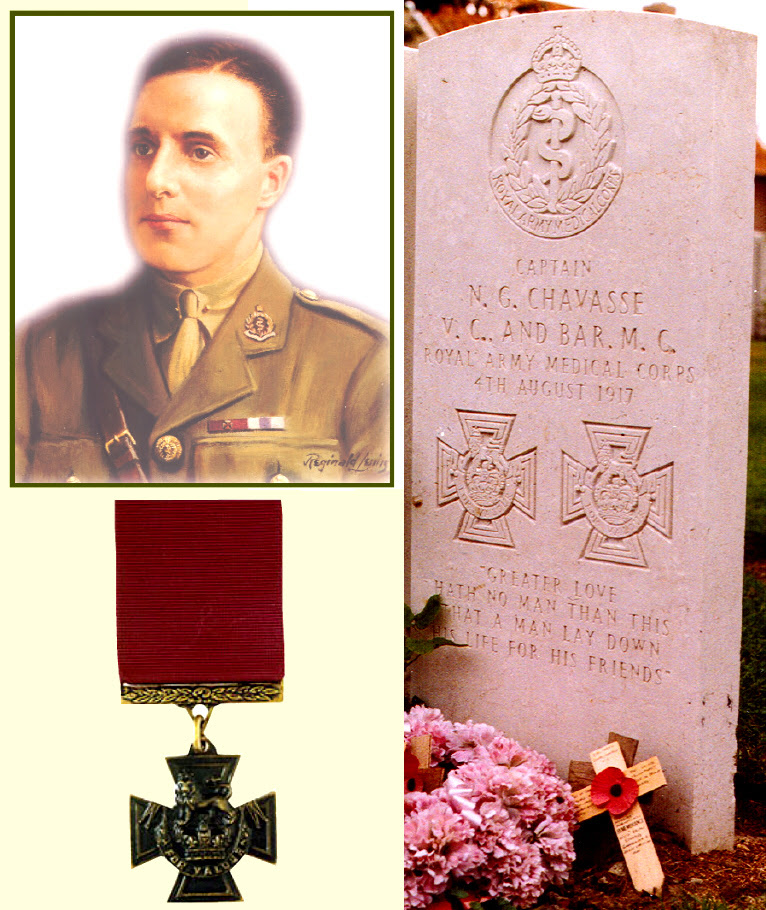 Noel Chavasse was one of identical twins, his brother being called Christopher. They were born on 9 November 1884 in Oxford. They moved with their family a few years later, when their father was made Anglican bishop of Liverpool. The twins were both very good at sports — so good that when they were at university they represented Great Britain in the 400 meters at the 1908 Olympic Games.

Noel trained to become a doctor and when war broke out in 1914 served with the Royal Army Medical Corps, attached to the Liverpool Scottish Regiment. Very soon he was sent to France.

Noel's first Victoria Cross was for action on the Somme in 1916. His regiment was in action at a place called Guillemont. Many were killed or wounded. Here is an account of the actions that earned him a Victoria Cross:

He tended the wounded in the open all day, under heavy fire, often in view of the enemy. The next night he searched for wounded in front of the enemy's lines for four hours. Next day, with a stretcher-bearer, he carried an urgent case for 500 yards, under heavy fire, into safety and was wounded in the side by a shell splinter. The same night he rescued three wounded men from a shell hole twenty-five yards from the enemy's trench, buried the bodies of two officers and collected many identity discs, although fired on by bombs and machine guns. Altogether he saved the lives of some twenty badly wounded men, as well as taking care of his other patients.

His second Victoria Cross was earned in 1917. The regiment was fighting at Passchendaele, in the mud and the constant driving rain that made conditions horrendous beyond belief.

Though severely wounded himself whilst rescuing an injured soldier, he refused to leave his post, and for two days, not only continued to perform his duties, but in addition, went out repeatedly under heavy fire to search for and attend to the wounded left on the battlefield. During these searches, although practically without food during this period, exhausted and in severe pain, he helped to carry badly wounded men over heavy and difficult ground. By his extraordinary energy and inspiring example he rescued many wounded who would have otherwise undoubtedly died in the bad weather conditions.

A short time later he died from his own wounds. His second Victoria Cross was awarded posthumously. Noel Chavasse is buried at the Commonwealth War Graves Brandhoek New Military Cemetery. His headstone shows his two Victoria Crosses and the inscription chosen by his father:

Greater love hath no man than this, that a man lay down his life for his friends