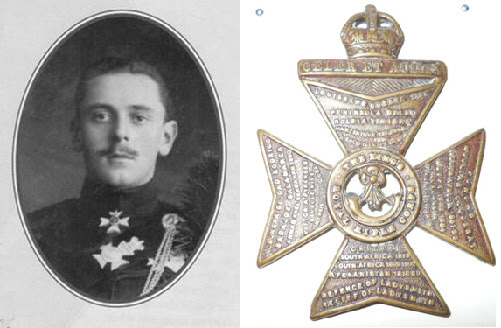 The Soldier
The Soldier Lt. HRH Prince Maurice of Battenberg (1891-1914), the youngest grandchild of Queen Victoria and a first cousin to George V, died at Ypres on 27 October 1914. He was also a first cousin (twice removed) of the present Duke of Edinburgh. He served in the British Expeditionary Force in the 2nd Battalion, King's Royal Rifle Corps (cap badge shown above).

At the First Battle of Ypres in 1914, the first battalion of the King's Royal Rifle Corps crossed from Zonnebeke to Broodseinde to stop the German infantry on the Keiberg. Prince Maurice was a lieutenant commanding the second division [?] of the battalion. As soon as all the troops had crossed, the enemy opened fire from their position on the Keiberg. The prince was mortally wounded by shrapnel and died on the field before his men could take him to safety. At Princess Beatrice's request, he was buried among his men in the Ypres Town Commonwealth War Graves Commission Cemetery. A monument dedicated to his memory was erected at the Royal Burial Grounds at Frogmore in 1917.

His Outfit Originally raised in 1756 in the North American colonies to address the need for soldiers who understood forest warfare, this regiment went on to serve with distinction on the Peninsula, in India, and in South Africa. During the Great War 22 battalions were raised, quite a few considering that the regiment had no specific recruiting area and no Territorial battalions. Seven members of the KRRC won VCs during the war. After several combinations and amalgamations the heritage today is with The Rifles, which incorporates both rifles and light infantry.

The badge has the light infantry bugle in the center and displays battle honors, as was customary for rifle formations, which had no colors due to their use as small, mobile units. The motto shown on the badge, "celer et audax" ("swift and bold") was a reference to the regiment's unconventional style of fighting. The Maltese Cross appears on most (but not all) British rifle formation badges. I don't know why. There are also a few examples of non-rifle units with the Maltese Cross. As we know, the U.S. Army and Marines use the Maltese Cross on their marksmanship awards.

Sources consulted include Find a Grave