October 1915 — The Central Powers Return in Force to Serbia


By Matt Church
University of Louisville

The initial Serbian victories were obscured by the realization that Serbia stood little chance against the full power of the German and Austro-Hungarian armies. As historian John Keegan noted, Serbia's survival was predicated on the preoccupation of the Central Powers by other combatants (Keegan, 1995). The Allied assaults at Gallipoli and Salonika in 1915 were partly designed to relieve Serbia and these operations, when coupled with the Italian entry into the war, provide a certain respite for Serbian fortunes. Serbia's fate darkened when Bulgaria joined the Central Powers in 1915.


The Central Powers planned to decisively defeat Serbia and open communications with Istanbul via Belgrade (Keegan, 1995). The Serbs ordered a general mobilization and still had forces arrayed in the northern and eastern parts of their country. The placement of the Serbian forces had changed little since the initial Austro-Hungarian attack in 1914. 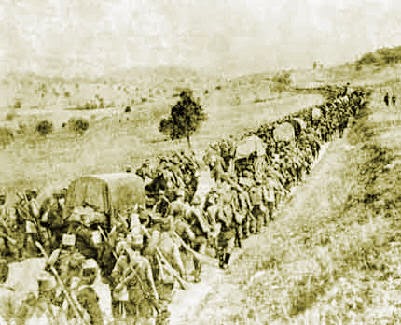 The Serbian Army in Retreat


The goal of the assault was to surround or pin down the Serbian forces, but the ruggedness and determination of the Serbs allowed for their survival. The Serbian army and thousands of civilians marched through Montenegro and Albania, eventually being transported by Italian ships to Corfu. Of the 200,000 who made the march with the Serbian forces, only 140,000 survived the march to Albania (Keegan, 1995). Austro-Hungarian forces took possession of Montenegro, and Serbia was effectively removed from the war. The resilience and determination of the Serbian forces in World War I is to be admired. While the Serbians were marching across the harsh Montenegrin mountains, Allied forces at Salonika were stunted by Bulgarian forces. Every Allied attempt to relieve pressure on Serbia met with failure, and the result was Bulgaria's entry into the war on the side of the Central Powers and the removal of the Serbian army from the Balkan theater.