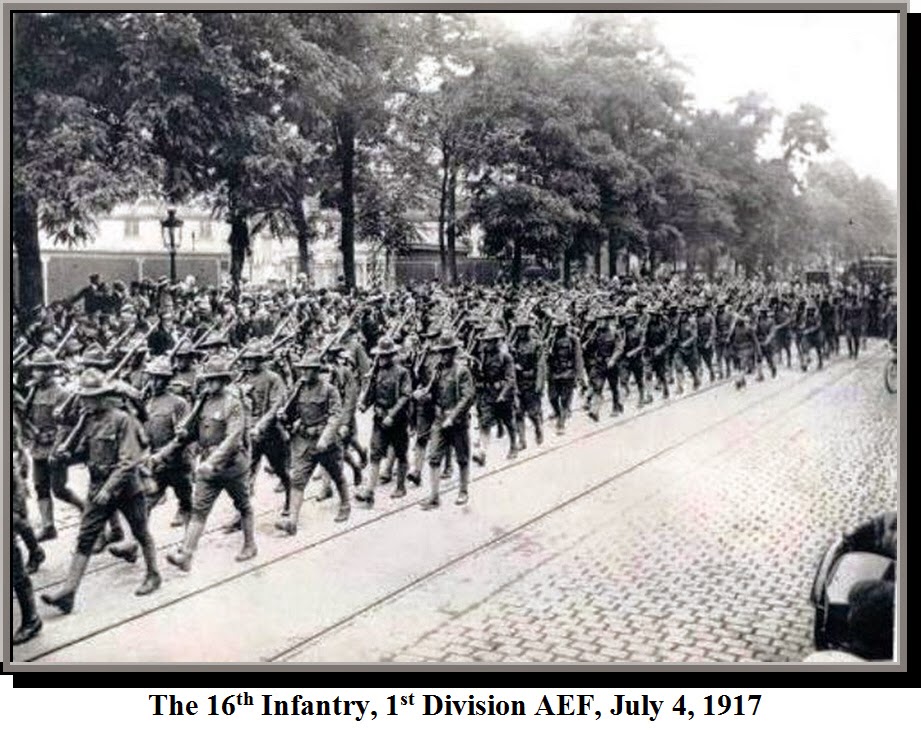 Vive l'Amérique! An historic day to have arrived in Paris—though a bad one for my particular quest on this very account. After a real bath at the Crillon, I met the Strongs hustling about—must go immediately to Les Invalides—they have tickets—special seats—Pershing—American troops—Fourth of July—punctually at nine—great doings, and so forth. So, breakfast-less, I joined them and we rushed off in a decrepit taxi, but soon became so mixed up in the crowd we never got to our seats—merely saw between people's heads the bayonets of our boys squared up in the inner court. The corridors were jammed with poilus and others, frantically cheering while General Pershing received two banners from the descendants of men who had fought with Lafayette.  I escaped back to breakfast and was just opening an egg when they came marching across the Place de la Concorde—about a battalion, I should think, of not especially well-set-up or well-drilled troops—newly enlisted men of the 16th Infantry, I believe —marching in squads.

I left the egg and joined the excited populace, which was fairly mobbing the men, covering them with flowers—quite thrilling. In the midst of it all a daring aviator swooped into the square—down, it seemed, almost to the people's heads, certainly below the level of the obelisk-turned corners standing on one wing, then on the other—rose again, dived down and up once more—looped the loop once or twice—then climbed up and was away to the south. A most daredevil, Gallic performance. Guynemer, they said it was—an ace—many German planes to his credit—in a new Hispano-Suiza machine [SPAD] capable of 200 km. an hour.  I walked back to the Crillon wondering about my egg, when some American Ambulance people insisted that I go with them to the ceremony at the Picpus. The cemetery where Lafayette is buried is in a remote part of Paris, and we reached there some half hour before the battalion arrived. Though allowed in the churchyard, we were held up at the entrance to the small enclosure where is Lafayette's tomb, surrounded by an old crumbling wall about ten feet or so in height.

Later That Day at Picpus Cemetery

At this juncture various kinds of people—newspaper photographers, some blessés (not very blessé), and some French people of neither military age nor military sex—began to scale the wall with the aid of a ladder procured from somewhere. A Frenchwoman, well astride, beckoned to Mrs. Rhodes that there was room beside her, and up she went without a moment's hesitation. So I followed and straddled the wall. . . we had the best possible view of the ceremonies below us and hope we were not in range of the movie cameras going off like a barrage on all sides.

Many dignitaries were grouped about the tomb, "Papa" Joffre among them, and I may add that he had to be pushed forward into the front row, for, though he has been kicked upstairs by an unappreciative government, the people still adore him. Mr. Sharp spoke at length. Brand Whitlock read at still greater length many pages about civilization and humanity—very immaculate, in eye-glasses with a heavy black braid and in spats—both the speech and B.W. Then Colonel [Captain at the time] Charles E. Stanton, U.S.A., brief and to the point. Finally, le Général Pershing s'avance à la tribune "without the intention of speaking"; but he did, briefly—a fine-looking man with a square chin and proper shoulders. Then followed more in French by M. Painlevé, Minister of War, and finally the Mayor of Puy wound up with an hommage or something of the sort to Lafayette. Thereupon we climbed down, or rather fell off, into the cabbage garden on the side we had ascended, and took our way back to the Crillon, seeing the flower-bedecked battalion pass by with their escort of French cavalry.

I regret I cannot speak to the good people of France in the beautiful language of their own fair country.

The fact cannot be forgotten that your nation was our friend when America was struggling for existence, when a handful of brave and patriotic people were determined to uphold the rights their Creator gave them—that France in the person of Lafayette came to our aid in words and deed.

It would be ingratitude not to remember this and America defaults no obligations...

Therefore it is with loving pride we drape the colors in tribute of respect to this citizen of your great Republic, and here and now in the shadow of the illustrious dead we pledge our hearts and our honor in carrying this war to successful issue.

LAFAYETTE — WE ARE HERE !

From the Letters of Dr. Harvey Cushing, who was a great neurosurgeon of the day.  Photos from the Lafayette University website.