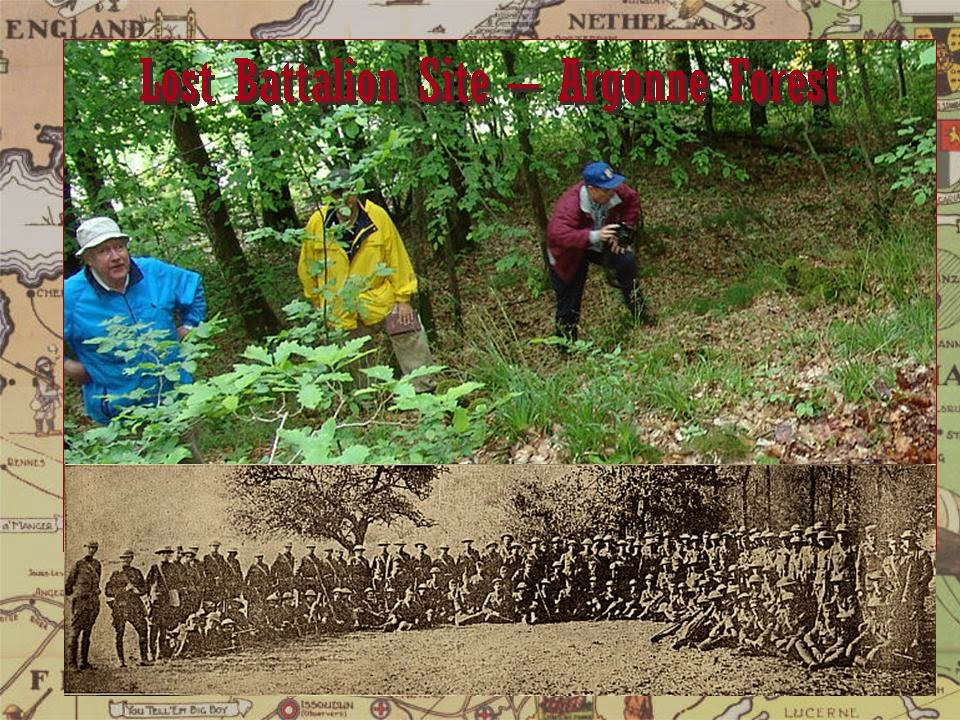 From the personal experience monograph of Captain Nelson M. Holderman, who at the time commanded Company K of the 307th Infantry. Holderman later received the Medal of Honor for his service during the incident.

On October 2, 1918, elements of the U. S. 77th Division attacked northward in the Argonne Forest. A force under the command of Major Charles W. Whittlesey, consisting of headquarters scouts and runners of the 1st and 2d Battalions of the 308th Infantry, Companies A, B, C, E, G and H of the 308th Infantry, two platoons of Companies C and D of the 306th Machine-Gun Battalion, and Company K of the 307th Infantry, reached its objective east of the Moulin de Charlevaux. Company K of the 307th Infantry joined the command after the objective had been reached.

Neighboring units and supporting troops had been stopped far short of the line reached by Major Whittlesey. The Germans quickly seized this opportunity to work their way behind this isolated unit and cut its communications with American troops to the rear. This force-known to history as the Lost Battalion was cut off and surrounded. It had only one day's ration for four companies.

Upon reaching his objective, Major Whittlesey had organized for defense. Enemy artillery shelled the position. This ceased after a time and trench-mortar fire followed. An attempt to establish contact with the rear failing, the situation was reported by pigeon message and the force disposed for all-around defense.

The following message was then sent to all company and detachment commanders:

Our mission is to hold this position at all cost. Have this understood by every man in the command.

Fire from enemy machine guns and trench mortars continued. About 3:00 p.m. the next day (October 3) the Germans launched a frontal attack supported by fire from the flanks and rear. The leading assailants got close enough to throw grenades, but the attack failed. About 5:00 p.m. another attack came from both flanks. This too was repulsed but with heavy American losses.  By way of medical assistance the Americans had three Medical Corps enlisted men; no medical officer had accompanied the outfit. All dressings and first-aid bandages were exhausted on the night of the 3rd.

Daylight of October 4 found the men tired and hungry. All, especially the wounded, had suffered bitterly from the cold during the night. More enemy trench mortars went into position and opened a steady fire, causing heavy casualties. Scouts reported that the Germans were all around the position in large numbers. No word from the rear had been received. Again the situation was reported by pigeon message.

During the afternoon of the 4th an American barrage, starting in the south, swept forward and settled down on the position, causing more losses. German trench mortars added their shells. At this time the last pigeon was released with a message giving the location of the force and stating that American artillery was placing a barrage on it.

American planes flew over the position and were fired on by the Germans. About 5:00 p.m. a new German attack was repulsed. Water was being obtained from a muddy stream along the ravine below the position. Often a canteen of water cost a casualty, for the enemy had laid guns to cover the stream. Guards were therefore posted to keep men from going to the stream during daylight. A chilly rain the night of the 4th added to the discomfort.

About 9:00 p.m. a German surprise attack failed. The wounded were now in terrible condition and, like the rest of the force, were without food.  Indications of American attacks from the south had been noted, but no relief came. Actually, several battalions of the 77th Division had been almost wiped out in valiant but vain efforts to reach the Lost Battalion.

During the afternoon of October 5, French artillery located to the southwest opened a heavy fire on the position. The Germans waited until the French fire lifted and then launched another attack which the Americans again stopped.

Shortly after this, American airplanes attempted to drop packages in the position but their aim was bad and the packages fell in the German lines. The men realized that this was an effort to get food to them.  Bandages for the wounded were now being taken from the dead; even wrap-leggings were used. It became increasingly difficult to get water.

On the morning of October 6 the enemy's rifles and machine guns started early and his trench mortars again took up their pounding. Another American airplane came over and dropped packages, but again they fell in the German lines. Soon afterward there were signs that the Germans were forming for another attack, but this was broken up by American artillery fire.

During the afternoon of October 6 a murderous machine-gun barrage plastered the position and took a heavy toll. This was immediately followed by an attack which, though beaten off, added to the roll of dead and wounded.  By this time ammunition was running low. But despite everything, courage and morale remained high. The men were determined to fight to a finish.

About noon on the 7th another attack was repulsed. At 4:00 p.m. enemy firing ceased. From the left flank an American soldier appeared limping toward the position. He carried a long stick with a piece of white cloth tied to it. This soldier had been captured while attempting to obtain a package of food dropped by the airplanes. He brought a letter from the German commander, neatly typewritten in English.

SIR:
The bearer of this present, private __________ has been taken prisoner by us. He refused to give the German intelligence officer any answer to his questions, and is quite an honorable fellow, doing honor to his Fatherland in the strictest sense of the word.

He has been charged against his will, believing he is doing wrong to  his country, to carry forward this present letter to the officer in charge of the battalion of the 77th Division, with the purpose to recommend this commander to surrender with his forces, as it  would be quite useless to resist any more, in view of the present conditions.

The suffering of your wounded men can be heard over here in the German lines, and we are appealing to your humane sentiments  to stop. A white flag shown by one of your men will tell us that you agree with these conditions. Please treat Private__________ as an  honorable man. He is quite a soldier. We envy you.

Major Whittlesey made no reply, oral or written. He ordered two white airplane panels which were being displayed to be taken in at once. Nothing white was to show on the hillside.  The fiercest attack of the siege followed. Wounded men dragged themselves to the firing line, and those who could not fire loaded rifles. The enemy used flame throwers in this attack, and nearly took the position. But finally he was driven off.

At dusk on the 7th it seemed impossible to hold out. Only two machine guns were left of the original nine. No gunners remained to man them. Ammunition was almost exhausted. The next attack would have to be met with the bayonet. There had been no food since the morning of October 3rd. The water obtained was slimy and bad. Still these men were willing to fight on.

That night the enemy withdrew and American troops arrived soon afterward. One hundred and ninety-four (194) men [photo above] out of the 700 that jumped off on the morning of October 2nd were able to walk out of the position. Many of these were wounded.  Despite the desperate situation and the hardships, the morale of the Lost Battalion had not been broken. Inspired by their leader, the men were determined to fight to a finish.