Remembering a Veteran: Lt. Elmer Focke, Survivor of the Rock of the Marne Episode Gets Wounded

First Lt. Elmer J. Focke of the 38th Infantry, 3rd Division, survived the brutal  fighting of the Rock of the Marne incident of 15 July 1918, when his unit was instrumental in turning back the last German offensive of the war. He was later wounded in the arm during the subsequent fighting in the Second Battle of the Marne as his division advanced north after crossing the Marne and had fought its way to the south bank of the Vesle River. His account: 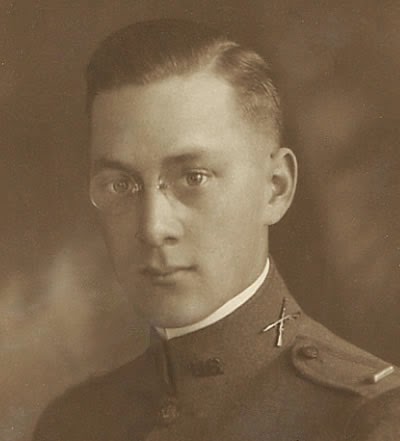 On the day I was wounded August 8, 1918, I was in a gravel pit with my platoon. It was early morning and we had orders to move out, and move we did. It was on a slight hillside and as we went down this gravel road, there stood Father Gainey, our Chaplain, with a gold cross, blessing each group as it passed by him. This was the only time in my life I ever felt the blessing was meant for me.

We were deployed in an open field with no cover, moving towards our objective, when Dewey Reeves who was four or five feet in front of me with his gun in his outstretched arms, turned and fell dead. I never once have felt anything but love for my country, but as you get older, war seems so damn foolish. I don't remember being told this, but it seems like an unwritten law. It's normal, thinking that a man would stop to help a wounded soldier, but the end result would be if there were many wounded, the Captain would end up with out a company. We were told somewhere alone the line that the Brigadier General who had ordered us down this open terrain in broad daylight, with no cover, was relieved of his command.

It might be of interest to know how soldiers who are wounded are evacuated from the front lines. I was fortunate in being wounded in my left arm, so I was a walking case and needed no help. I put my watchband above my wound and twisted it with a stick I found to stop the bleeding. I remained at the front all morning. Walking to the rear was a very sad experience for me. Some of the soldiers who were seriously wounded the day before and were not yet evacuated, were lying in open fields moaning and crying. I noticed a First Aid Station and it was here that I was given an anti-tetanus shot. I then walked back to Chateau Thierry where the wounded were tagged and assigned to various hospitals. I don't know where it was, but I finally landed in a Convent.


The operating room was a big room with four operating tables being used at the same time. One thing I remember I was embarrassed about my personal appearance and hygiene and said to the doctor "Would you believe that back in the states I use to wear silk underwear". They did not remove the large slug from my arm, but rather had me sent to a larger hospital in Paris. This hospital was formerly an American girl's  art school and was run by the American Red Cross. While hospitalized in Paris I had an experience which was very enjoyable. My nurse was an American. Being a walking patient, we finally got around to having a date. I had no money and she paid for everything we did and saw.

After getting well I was ordered back to the front. Headquarters were in Nancy, France. A farmer once walked up to me and thanked me for all that the Americans were doing for his country. He then offered his daughter for me to sleep with. I declined the offer, and that may seem strange to those not there in France, but that was how things were done over there during a time of war. I was soon sent back to the front lines.