The Lost Sketchbooks: A Young Artist in the Great War
Reviewed by David Beer

The Lost Sketchbooks: A Young Artist in the Great War
By Rex Passion, with drawings by Edward Shenton
Komatik Press, 2014

It's no accident that The Lost Sketchbooks is the shape and size of half a standard sketchbook. By choosing this shape, the author and publisher adopted the size of the book's subject — sketches drawn by a young combat engineer who found standard drawing books too large to carry. Thus he cut them in half to more easily fit into his kit. Periodically he would send the filled books back to his father in Philadelphia. 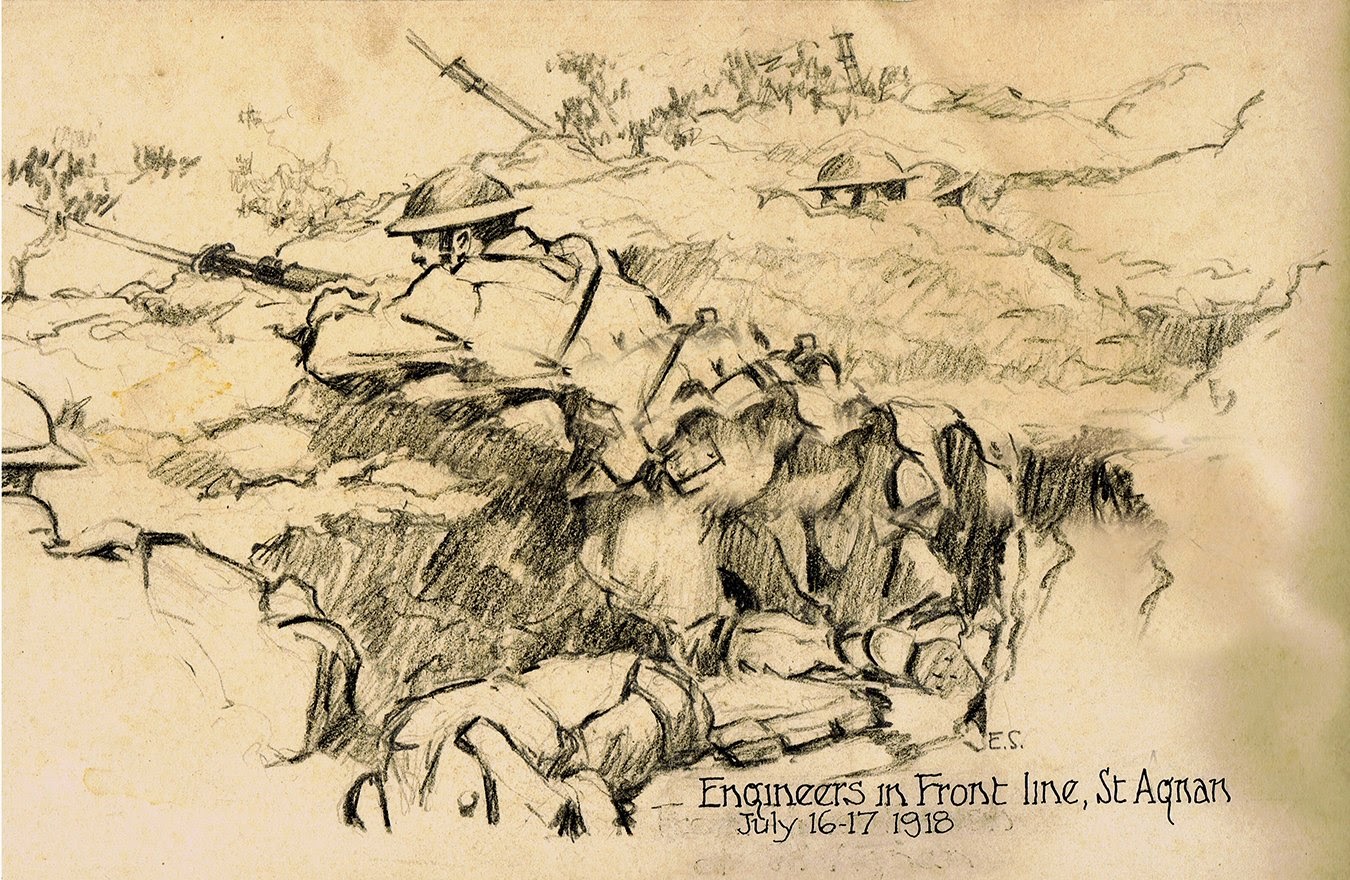 Even with this limited size, author Rex Passion is able to give us in 150 pages a fascinating account of the WWI experiences and artwork of Harry Edward Shenton, Jr. Shenton, a native of Pennsylvania, served in the 103rd Engineers, 28th Division, AEF. He was already accomplished at drawing when he went to war, and after the war he had a notable career spanning some 50 years as an editor, novelist, poet, and illustrator. His many later accomplishments included the cover art for Scribner's magazine and illustrating the covers of novels by Faulkner, Fitzgerald, Hemingway, Thomas Wolfe, and other noted American authors. Among his best known drawings were those he provided for Marjorie Rawlings's The Yearling. He died in 1977, having among other successes produced two 20-by-12-foot murals for the Chapel of the War Memorial Cemetery at Saint-James in Brittany, France, portraying the WWII invasion of Normandy.


The Lost Sketchbooks is an apt title for this volume because the 150 sketches it contains are from a collection of some 500 produced by Shenton during two years of war service, then put aside when he returned home in 1919. They were lost to the light of day until 2009 when Rex Passion found them in the possession of Shenton's son Ned. Passion was also fortunate to find an out-of-print copy of a history of the engineering company Shenton served in, and was thus able to coordinate much of the artwork with actual events and places that inspired it.

Every page of this absorbing little book contains one or two of Shenton's sketches. The first chapter covers his early years, long before he enlisted, and shows that at an early age he was already accomplished at sketching. Drawings at this time include depictions of knights, frontier soldiers, automobiles, and illustrations for a school magazine to which he also contributed stories. Sometimes he added poetry to his sketches. In the spring of 1917 he produced a booklet of short poems entitled "The Mug-Wamp and Similar Spasms". By then he had enlisted in the National Guard, knowing that America would soon be at war. I can't resist including one of his delightful handwritten poems from this time. Besides echoing Lewis Carroll, it hints at the potential he had for his later successes not only in illustration but also in poetry and fiction:

A MUG-WAMP MOME:  Recording Emotions of Departure.  A True Study.
Hang all the flags at quarter-mast
The Mug-Wamp’s going away to war
Oh drop a tear within the soup
And fan the cabbages once more
Stand up and drink a silent toast
Of India-Ink and shaving-soap
And wipe your chin upon your plate
And watch the macaroons elope
Come! Turn the butter upside down
And heave the chicken out the door
Then clamber in the gravy bowl
The Mug-Wamp’s going away to war.

The Lost Sketchbooks proceeds chronologically with sections titled "Learning to be a Soldier", with sub-sections on Camp Meade and Camp Hancock; "Going to War", which is divided into seven sections based on where Shenton was and what campaigns he was involved in; and a final section titled "Fini le Guerre". Every page contains sketches (often done on the fly) of almost every conceivable experience a soldier could have in his situation. One striking message we get from his work is that being an engineer in the 103rd Engineers in WWI was a lot different than that of today's engineer. As we see from the sketches, life was often lived in pup tents, and "engineering" consisted of building roads, digging wells and trenches, and constructing bombproof dugouts— all using a pick and shovel.

Shenton's war took him to Saint Agnan, Fismes, the Meuse-Argonne, and on to Metz. Each experience is faithfully recorded in the sketches he made. We find portraits of friends, views of trenches and ruins, corpses and burying details, gas and barbed wire, ambulances and tanks, company kitchens, bridge-building, and road repairs. The final drawing, "Soldiers in the Mud", is evocative of what the Doughboys went through and how they felt, and reminds one of "Gassed" by John Singer Sargent. Rex Passion's narrative throughout the book greatly adds to our understanding of Shenton, his sketches, and his experiences, as do Passion's helpful notes on each sketch at the end of the book.

Tragically, Ed Shenton's brother Don, who had also enlisted in an engineering company back in 1917, was killed with four others nine days after the Armistice while clearing mines. In spite of this loss, a later photo of Edward Shenton at the back of the book shows the face of a pleasant and accomplished man, a man who always claimed to be an illustrator rather than an artist. He survived the war and was widely recognized for his work in his lifetime. The Lost Sketchbooks will give you an absorbing insight into his life and WWI drawings —work that had remained unknown to anyone for some 90 or more years.