Recommended: Behind Their Lines, a WWI Poetry Blog

I know from our comments and emails that we have a lot of war poetry fans who check in at Roads to the Great War.  Let me recommend Connie Ruzich's wide-ranging blog Behind Their Lines for you.  Here is a sample posting from 12 March 2015:

If not for the context in which Ernest Rhys's poem originally appeared (more on that later), "Jo's Requiem" would not be easily identifiable as a war poem at all.  The poem offers no description of the First World War,  not of the trenches, nor of the suffering and death that occurred there.

Instead, this is a poem that is firmly grounded in the English countryside. There, a man simply named Jo earns his strength behind a plow, watches with sharp-eyed vision for birds that might threaten his newly sown seed, and is so attuned to his land that "He could hear the green oats growing,/and the south-west wind making rain." I'd like to meet that man.

He had the ploughman's strength
in the grasp of his hand;
he could see a crow
three miles away,
and the trout beneath the stone.
He could hear the green oats growing,
and the south-west wind making rain.
He could hear the wheel upon the hill
when it left the level road.
He could make a gate, and dig a pit,
and plough as straight as stone can fall.
And he is dead. 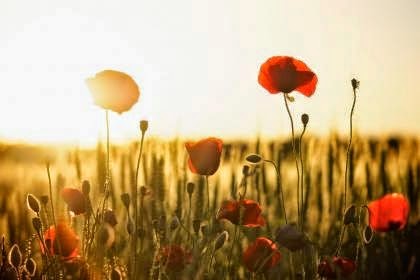 We learn that Jo has spent a lifetime in learning to read the subtle signs of life that surround him, spotting even "the trout beneath the stone."  His actions are neither noble nor heroic, yet he masters the world around him with skill and honest work, in making and digging.

And he is dead. The last line of the poem breaks with all that has gone before and ends as abruptly a sniper's bullet or an artillery shell. We are not told if Jo fell "straight as stone can fall."  It doesn't matter how it happened; the details of his death are irrelevant as they will not change the reality of it.

The poem's bare closing statement heartbreakingly expresses the utter finality of death. As Robert Frost writes in "Out, Out—", a poem of unexpected death on a farm, "No more to build on there."

"Jo's Requiem" does not argue with death, nor does it attempt to glorify or justify the cause for which this man died. The poem deliberately refuses any explicit attempt at making meaning of Jo's death. What we are asked to see in the poem is one country man and his life, not the scope of the war or the nameless and faceless mass of the millions who died.

Implicitly, however, there is a sense of injustice underlying the stark contrast of the poem's first 11 lines and its final sentence. Strength and keen-sightedness were not enough to save Jo, nor were his practical talents, resourcefulness, and listening ear. The poem doesn't try to explain Jo's death, for no sense can be made of a senseless war in which over nine million died. The poem only asks us to remember and to mourn, as signaled by its brief title, "Jo's Requiem."

Curiously, the poem at some point was re-titled "Lost in France." First published as "Jo's Requiem" in Rhys's volume of poetry The Leaf Burners (1918), it appeared as the last poem in a series of 20 related verses entitled "The Tommiad." The title of the verse sequence is a play on the "Iliad", suggesting an epic about British Tommies, the name given to British infantry soldiers. But Ernest Rhys was a Welsh writer, and the title of the verse sequence may also be a play on the Welsh word tomi, "to spread dung" or "to bespatter with dirt", suggesting a much less glorious view of the First World War.

But the title change is significant. It alters the poem from being a tribute to a single, knowable man to a more abstract comment on an enormous and indecipherable war.

It is said that history repeats itself, and as actually happened in the First World War, the name of this man is being erased from memory.

Check in to see more entries and subscribe to Behind Their Lines here: