Irish-born Lance Cpl Michael O’Leary of the Irish Guards (later commissioned in the Connaught Rangers) was the first Canadian to receive the Victoria Cross in the Great War, on 1 February 1915. Before the war O’Leary served in Canada with the Royal Northwest Mounted Police. Due to his Irish birth, O’Leary gained substantial publicity and notoriety; even a play by GB Shaw was based on O’Leary’s deeds. 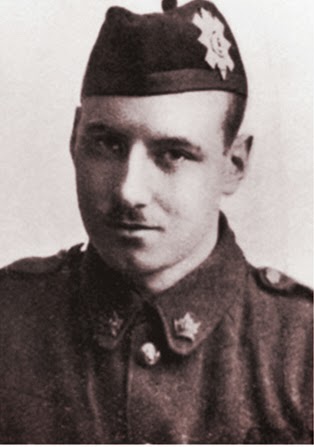 However, the first Canadian-born soldier serving with a Canadian unit to receive the VC was Lance Corporal Fred Fisher (posthumous), of the 13th Battalion Canadian Expeditionary Force (CEF).

Born in St. Catherine’s, Ontario, his father was a bank manager and the family moved several times before settling in Montreal in 1905. As a schoolboy he excelled in both football and hockey. On 16 August 1914 he left his engineering studies at McGill University to join the 5th Regiment, Royal Highlanders of Canada. Three battalions of the Canadian Expeditionary Force were drawn from this militia unit: the 13th, 42nd and 73rd.

On 22 April 1915, when the Germans launched their infamous chlorine gas attack that began Second Ypres, Fisher formed and re-formed impromptu machine gun crews and repeatedly stopped advancing German units until he was killed on 23 April. His actions stopped the Germans from overrunning Canadian artillery before it could be withdrawn. His body was lost and he is commemorated on the Menin Gate. His VC is held by the RHRC museum.