This is an extremely readable book that appropriately appears exactly a century after the year it focuses on. Looking at 12 areas of the world in 1916, Keith Jeffery illustrates how the war was indeed a global disaster. As he points out in his introduction, "My aim in this book has been to use emblematic events from each month of 1916 as hooks for a series of reflections through which the astonishing range, variety and interconnectedness of the wartime experience can be charted" (3). 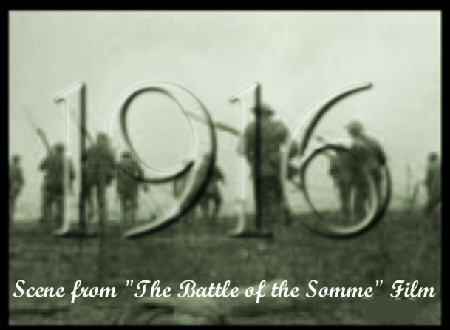 It's not hard to identify the crucial events of 1916, of course, but it's understandably impossible to view them in isolation. The flow of cause and effect can't be partitioned that way. Thus Jeffery's first chapter, on Gallipoli, deals with a lot of what took place in 1915 as well as the tense troop withdrawals which culminated in January 1916. By the end of this chapter we know much about the debates and reasons leading up to the landings, the terrible conditions encountered, and the amazing variety of combatants involved (including the Zion Mule Corps). An analysis of how time has dealt with the memory of Gallipoli among the involved nations and peoples concludes this chapter.

Other chapters follow the same course, straying for various good reasons outside their assigned year. Since there is little interplay between chapters, 1916 could almost be considered an anthology of articles rather than a flowing history of the war. The author's desire to primarily show how WWI was, as his subtitle indicates, a truly global disaster happening in many areas leads him to focus on specific actions in specific places.

That the author is an Irishman is evident from the start, and Ireland plays a recurring theme in his book. Following Verdun and the Isonzo, chapter 4 looks squarely at the events of 24 April 1916 in Dublin. Interestingly titled "Ypres on the Liffey" (The Liffey is the river that flows through Dublin.), the chapter opens with Roger Casement and his meandering career culminating in his execution as a traitor. Just about all other Irish concerns of the time find a place in this chapter, including the painful paradox of resentment for the British and the vast numbers of Irishmen who volunteered to fight in the British Army. Halfway through 1916 the "greatest naval battle of the war" (Chapter 5) took place, following earlier engagements in the Pacific, South Atlantic, and Indian Oceans. Jutland turned out to be the high point of naval warfare, but economic warfare was to continue on the high seas with blockades and submarines. These are often thought of as mainly British and German matters, but stressing the global nature of the war, Jeffery shows how other nations such as the Dominican Republic, Chile, Argentina, Brazil, Portugal, Japan, and the USA were also affected by the war on and under the seas.

Next the author looks at the Eastern Front, first at the early battles of 1914 and 1915 which then led up to "the last great Russian effort of the war, the Brusilov offensive [which was] launched on 4 June 1916. . .and effectively destroyed the Habsburgs' military capacity, though it simultaneously placed intolerable strains on the Russian empire" (Ch. 6, p. 153). Following are chapters on Asia and Africa, where events and demands also serve to reveal that few colonized or indigenous peoples escaped the reach of the conflict.

As is well known, the Battle of the Somme began on 24 June 1916 and lasted almost to the end of the year. Jeffery doesn't ignore key events here, but he stresses Irish involvement in the battle. The 16th (Irish) Division drew substantial numbers of recruits from all over Ireland, Ulstermen as well as Catholic nationalists, and was to "carve a fine reputation for itself in some stiff fighting on the Western Front" (p. 246). The differing ways in which the Somme — and the war itself — have been commemorated all find a place in this chapter.


The final three chapters of 1916 cover the Eastern Mediterranean and Balkans, the USA, and Russia. Much familiar ground is covered. However, I found the sections on Greece, Serbia, and Salonika to be lucid reminders of these often-ignored theaters. The anti-war and then pro-war Woodrow Wilson receives much attention in Chapter 11, as do American attitudes toward the conflict. Propaganda and sabotage were rife at this time, all leading up to America's entry into the war in 1917. The Russian situation, with Rasputin's murder the day before 1916 came to a close, is the final topic of this book. Political and subsistence riots, enormous military losses, and the dark foreshadowing of what was to come all make up Jeffrey's closing chapter.

This book is easy to read and is a good refresher for those who are already familiar with the Great War. There are excellent notes and bibliography but the page of perfunctory maps is hardly useful. Some interesting illustrations are found in two different parts of the book, but I couldn't find any reference to them in the text. All in all, this is a good read that covers the important conflicts of 1916 while showing how nearly impossible it is to focus on the events of one year of the war without considering the foreshadowing and aftermath of those events.