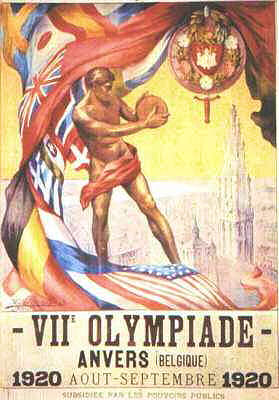 With the completion of the recent Olympic games in Rio, it's well to recall the impact of the Great War on the international sports festival. The 1916 games — scheduled for Berlin — had been cancelled, and the next games were destined to be held in the shadow of the war.

Nevertheless, the VIIth Olympiad, held 14–29 August 1920 in Antwerp, Belgium — a city occupied for most of the war — was strikingly different from any earlier or subsequent event. The selection process for the site, who would be invited to compete, the preparations, and the military aesthetic and sensibility that permeated the games were dramatically influenced by the war.

The Olympic ideal was supposed to be "above" all politics and the International Olympic Committee had purposely settled down in neutral Lausanne during the hostilities, but its president, Baron de Coubertin (who, as a Frenchman, had luckily enough found himself on the correct side) had enough common sense to understand that less than two years after the end of the war, German or Austrian athletes would not be welcomed with open arms in a country that they had helped ruin. The former Central Powers (or what was left of them) were not really excluded. They were simply not invited to participate in 1920. It would not be until the 1928 Olympics that Germany once again sent athletes to the Games. Neither was Bolshevik Russia invited; not only was it considered a subversive state advocating the spread of world revolution, it had also left the Allies in the lurch in 1918 by signing a separate peace treaty with Germany and Austria. Moreover, Bolshevik Russia was engaged in warfare with the newly independent Polish state, a state that was receiving military aid and assistance from France. Twenty-nine nations accepted the invitation to participate. Among them were the newly independent states of Estonia, Czechoslovakia, and Finland, created in the aftermath of the Great War.

On 14 August 1920, King Albert I of Belgium, wearing the uniform of supreme commander of the Belgian Army, opened the VIIth Olympiad with these words: "In reply to our invitation, athletes from the four corners of the earth have gathered together in Antwerp to celebrate with us the return of peace."

At the stadium entrance where one would expect a sculpture expressing the essence of athletic competition, something like a hurdler or discus thrower, was a statue of a soldier throwing a grenade. At the opening ceremony, Belgian soldiers ringed the field, and the American contingent was led by a flag bearer in the team uniform of blazer and straw boater accompanied by four officers of the U.S. military. The Olympic oath was taken by medal-winning water polo player and fencer Victor Boin, who had received the Croix de Guerre with Palms (both French and Belgian Croix de Guerre), for bombing and sinking an enemy submarine in the North Sea, destroying numerous floating mines and rescuing several French aviators. He was supported in the ceremony by two fellow Belgian war heroes.