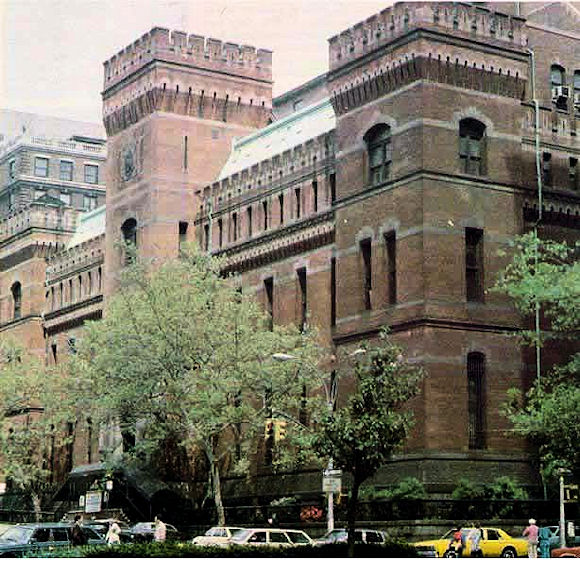 Arguably the most opulent National Guard armory in the United States stands on New York City’s Park Avenue, a few blocks from Central Park. Since the 1880s it has been home to the Seventh New York National Guard Regiment, a regiment known for its “silk stocking soldiers” and for giving us the name “National Guard.” The illustrious families of these soldiers bear out the silk stocking nickname: Vanderbilt, Van Buren, Roosevelt, Rhinelander, Stuyvesant, Astor, and Harriman to list a few.

The Seventh Regiment Armory was built in 1880 for $2.5 million and had been privately paid for without a penny pinched from New York’s city or state coffers nor a cent taken from the federal government. It covered an entire block in Manhattan’s plush Upper East Side, between Sixth-sixth and Sixty-seventh Streets. Because the land was owned by the city, the regiment leased it for the princely sum of one dollar a year.

When the great citadel was finished, it stood four stories high with a watchtower that rose majestically above it. The watchtower has since been lopped off.

The rear of the armory is a great drill hall, at one time larger than the playing field of the Brooklyn Dodgers’ old Ebbets Field. It was designed by the Delaware Bridge Company to look like the inside of the railroad shed at Cornelius Vanderbilt’s original Grand Central Depot with a massive iron-truss system. The drill hall easily handled a muster of 2,000 men. A gallery overlooked the drill hall so dignitaries, wives, and sweethearts could comfortably view New York’s captains of industry, as in a Broadway theater—its leading merchants, lawyers, bankers, and stockbrokers; newspaper reporters, magazine editors, writers, and illustrators; actors, artists, poets, and musicians—in full military regalia.

However, the most impressive feature of the Seventh Regiment Armory was its interior. Here the likes of Louis Comfort Tiffany and Associated Artists, Stanford White, the Herter Brothers, Leon Marcotte, Alexander Roux, Pottier and Stymes, and other eminent artisans of the Gilded Age virtually had free reign in the design and furnishings of the regimental headquarters and company rooms, reception parlor, library, mess hall, and gymnasium. Each outclassed the other in elegance and grandeur. The spirited competition was too obvious, and in the end the splendid stronghold that safeguarded the fashionable East Side rather showed off the money and artistic virtuosity of its owners than their military might.

The silk stocking soldiers, meanwhile, had never seen combat—not in the War with Mexico, the American Civil War or the Spanish-American War. They were looked upon as slackers, and during parades white feathers—a symbol of cowardice—were thrown at them as they marched along Fifth Avenue.

But in the First World War, with the name of the regiment changed to the 107th Infantry Regiment, as part of the 27th Empire Division, attached to the British, not the AEF, these silk stocking soldiers, on 29 September, attacked the very center of the Hindenburg Line and, according to its history, lost more men killed on a single day of fighting than any regiment in United States history. Some 349 of the 2,500 combat officers and men of the 107th were killed that day. Including wounded and missing in action, there were 1,062  casualties. The 107th, that day, earned four Congressional Medals of Honor. [Editor's note:  I've researched the claim of the regiment's historian that 107th had more men killed in one day than any other regiment in U.S. history. It seems to hold up — the closest I could find is the 341 men killed from the 116th Regiment of the 29th Division that stormed Omaha Beach on 6 June 1944. Comments are welcome.]

Remembering the silk stocking heroes, Gen. John F. Ryan, commander of the 27th Division, and himself a member of the old Seventh, recalled, “The roster of the dead contains the best names of the city of New York—best in the sense of family tradition and all that stands for good citizenship in the history of the city.”

And the Seventh Regiment Armory, now called the Park Avenue Armory, is still a fitting monument to those courageous New Yorkers.

Steve’s books on World War One include Duty, Honor, Privilege: New York’s Silk Stocking Regiment and the Breaking of the Hindenburg Line.