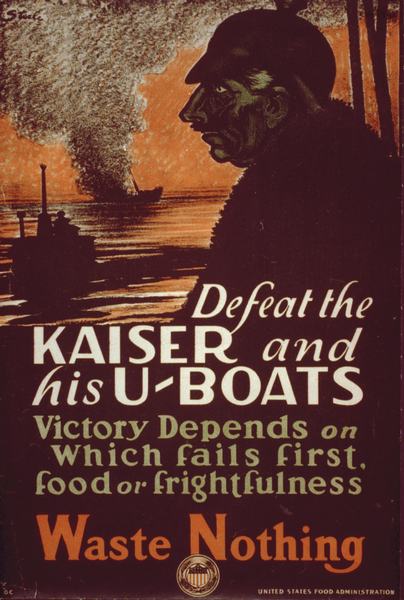 The Germans started World War I with only 24 U-boats. Their campaign against Allied shipping did not begin until early 1915, and after several starts and stops, unrestricted submarine warfare did not begin until February 1917. Over the next year, the Allies lost more than 5.5 million tons of merchant shipping, a loss rate that substantially exceeded new construction.

The U-boat threat was brought under control during the last year of the war, primarily through the implementation by the Royal Navy of escorted convoys, a measure that it had initially resisted. Convoying greatly complicated the open-ocean search problem for German submarines, because a group of ships was not much more likely to be found than a single ship, while escorts reduced the damage that submarines could cause when they did succeed in finding ships to attack.  It is important to note that escorts were much less effective at actually destroying submarines than they were at limiting their effectiveness by forcing them to submerge after their initial attack, which generally allowed the rest of the convoy to escape

In practice, the British were able to counter Germany’s resort to unrestricted submarine warfare only with the help of the Americans, who provided them with additional convoy escorts and merchant shipping, and who, with Britain, successfully pressured the large merchant fleets of countries that remained neutral to continue operation even after the prize rules were abandoned. Thus, Germany’s unrestricted submarine warfare campaign failed both because it brought the Americans into the war and because it failed to knock other neutral merchant fleets out of the war. Therefore, in an important sense, the political effects of the campaign negated its military effects, because Britain probably would not have survived the First Battle of the Atlantic if the Royal Navy and the British merchant marine had continued to face the U-boats on their own. As Arthur Hezlet has noted, “The defeat of the U-boats was not because the guerre de course (independent commerce raiding) could not by its nature be decisive: it was because the Allies were able to be strong everywhere and make a gigantic effort.”

The submarines that fought World War I were surface ships which were expected to submerge only in order to attack and escape better-armed surface targets, but which also lost a considerable portion of their mobility and situational awareness when submerged and, therefore, much of their potential offensive power. This characteristic was of course based largely on technical constraints, but it was also a function of expectations about their primary mission, which was assumed in most cases to be coastal defense or fleet cooperation, both of which contemplated attacks against major naval assets, against which surface engagements were suicidal.

The German campaign against Allied merchant shipping demonstrated instead that attacks against merchant ships could be most effectively prosecuted at night, on the surface, at relatively close range, even in the face of escorts. The challenge was to maximize the effects of these attacks, escape the escorts alerted by these attacks, and reengage.  Defined in this way, the operational demands placed on the “submersible” submarine were less in conflict with its basic technical limitations than when the challenge was to attack powerful naval vessels, as in the coastal defense or fleet cooperation missions.  This lesson drove the German submarine force toward the operational and tactical methods it employed in its World War II guerre de course, which emphasized night surface attacks by groups of submarines which would pursue individual convoys and repeatedly attack them over a period of a week or two.

These “wolf pack” tactics were pioneered by German Nazi Admiral Karl Doenitz during the interwar years. Wolf pack tactics did not demand a radically new type of submarine, and German interwar submarine designs were evolutionary, emphasizing longer range and endurance and larger torpedo salvos and magazines. The most important technical development that made wolf packs possible was the maturation of high frequency (HF) radio as a command and control mechanism. HF radio provided over-the-horizon performance from a relatively small, low-powered transmitter, and allowed deployed submarines to report convoy sightings to a central command post, which could then broadcast this information to all other submarines in that broad ocean area, allowing them to marshal for a concentrated attack by a dozen or so submarines.

Using night surface attacks, these wolf packs would strike the convoy simultaneously, from multiple azimuths, with multiple torpedo salvos, and then slip away.  Many such attacks would be conducted over the course of several days, with the wolf pack using the daylight hours to separate from the convoy and race ahead of it on the surface to get into firing position for the following night.