A U.S. Air Force Presence on the Somme!

[A Personal Note: I wanted to include an entry for today with a U.S. Air Force connection, so I've been saving this one. It was 50 years ago today I was sworn into the U.S. Air Force at the Oakland, California, induction center and sent on my way to Lackland AFB outside San Antonio. Six years later, I returned to civilian life a better man (so the family tells me), and I've never stopped appreciating my time in uniform.] 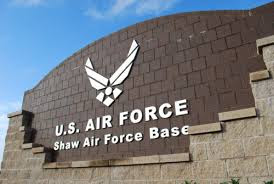 When I lead a battlefield tour, I always ask the group members to suggest sites of particular interest to them. For my recent tour of the Somme battlefield, member Rob Swaney suggested we stop at Regina Trench cemetery, where over 2,200 Canadian lads, who fell attacking that stoutly defended position, have their final resting place. After we arrived, Rob led us to one of the graves and told us the following story. It's one I had never heard before, despite my Air Force and WWI interests.

Shaw Air Force Base in Sumter, South Carolina, is named in honor of World War I pilot 1st Lieutenant Ervin David Shaw. Shaw, a Sumter County native, was assigned to the Royal Air Force 48 Squadron, as a member of the Royal Canadian Air Service in 1918. He had enlisted in the U. S. Army in June 1917, received training, and was anxious to see action. In April 1918 he requested an honorable discharge in order to accept a commission as pilot with Signal Reserve Corps, Royal Canadian Air Service.  He was eventually assigned to 48 Squadron of the RAF. Shaw died after three enemy aircraft attacked his Bristol F.2B while he was returning from a reconnaissance mission on 9 July 1918. Lt. Shaw downed one of his attackers before he was killed.

Being the first Sumterite killed in the Great War and the only Sumter aviator to die in combat, Ervin Shaw became the namesake of Shaw Air Force Base in Sumter County, SC, when the base was established in June 1941.


Sources:  Find a Grave and the Shaw AFB Websites.