What Did You Do in the Great War, Mr. Joyce?

Having left his native Dublin in 1904, James Joyce (1882–1941) settled for a decade in picturesque Trieste on the periphery of the Austro-Hungarian Empire . He published his masterful short story collection Dubliners on the eve of war. When Italy joined the hostilities in 1915, however, Trieste was threatened with invasion, and the author abhorred the thought of any exposure to war.

He fled to Zurich for the duration, where he was highly productive — completing A Portrait of the Artist as a Young Man in 1916 and much  of Ulysses (published in 1922). In his free time in Zurich he managed to meet fellow author Stefan Zweig, cross paths with Vladimir Lenin, and observe the birth of Dada, the First World War's contribution to modern art. it was in Zurich, however, where his eye troubles became serious.

Ulysses contains some war references, usually antiwar. It's set in 1904 so it predates the Great War and only the Boer and Russo-Japanese wars are mentioned. One apparent reference to the Battle of Tsushima seems a chronological error.  The battle occurred almost a year after Bloomsday (16 June 1904). It seems likely, though, that is was the current war that in any case was on the author's mind. A few of the shorter war references I've been able to track down in Ulysses include these:
After the Armistice, Joyce and his family returned to Trieste, but it had become a backwater —  no longer an imperial jewel.  It was on to Paris, but Zurich held a permanent place in his heart. Fleeing the Nazis, he returned in the Second World War and died there in January 1941.

Zurich retains a lasting affection for the Irish author. It is headquarters for the James Joyce Foundation and Library and in 2002 placed the statue shown below at his grave site. 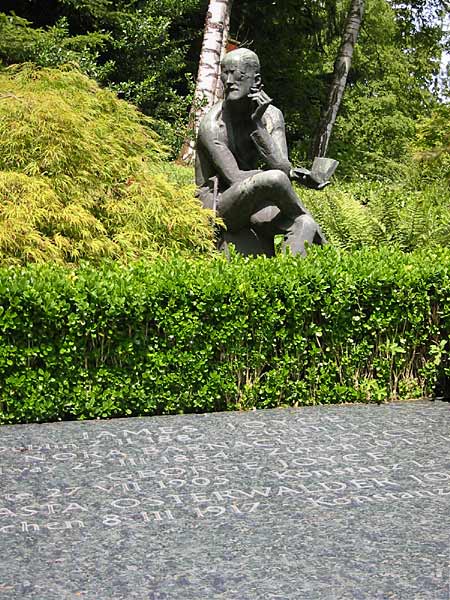