One of the archetypal First World War images is of the PH helmet respirator issued to British soldiers in the mid-period of the war. 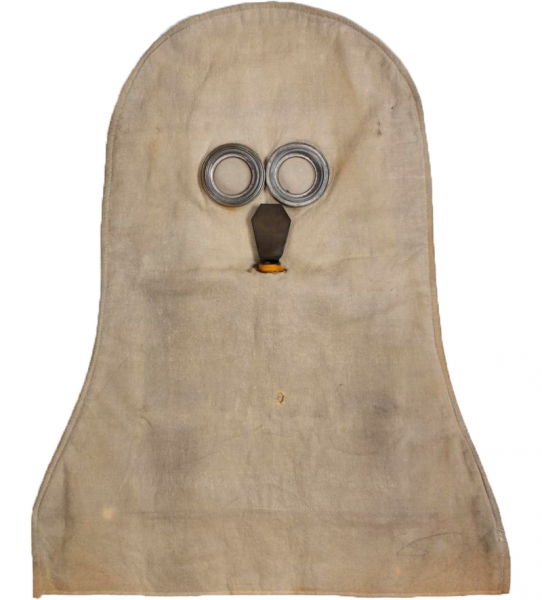 After the Second Battle of Ypres, in which asphyxiants were used to great effect, new gases such as phosgene and hydrogen cyanide made improved gas protection imperative.  Experiments indicated that a hooded helmet that had been first soaked in sodium phenate could provide protection. The Phenate Helmet (or 'P' Helmet, or the Tube Helmet, as it was officially known) was adopted from mid-November 1915 and featured the more durable glass goggles set on a hood made of multi-layered linen. The original design had had flannel layers of cloth dipped in sodium phenolate and glycerin, protecting against chlorine and phosgene but not against tear gas. Normal exhalation of carbon dioxide reduced the ability to combat hydrogen cyanide gas, so a tube-shaped valve was fitted so the wearer would breathe out through his mouth.

A further development followed the realization that when the P Helmet was exposed to greater concentrations of phosgene it lost its capacity to protect the wearer. The PH Helmet (Phenate Hexamine) replaced it in October 1915 and added hexamethylene tetramine, which greatly improved protection against phosgene and added protection against hydrocyanic acid.

From January 1916 all such helmets were to be dipped in a phenate-hexamine solution, thus the PH Helmet came into being, and it was this type that was commonly used by all British troops in France by July 1916. In the meantime, the small-box respirator – the most recognizable gas mask of the war – was being developed and introduced. It consisted of a face piece and a filter box, connected by a corrugated tube.

Sources:  The Imperial and Canadian War Museum Websites and Wikipedia