100 Years Ago: The Zimmermann Telegram Made Public

The notorious Zimmermann Telegram which contributed to America's entry into the Great War was revealed to the American public a century ago today, 1 March 1917. After the message was intercepted and decoded at the legendary Room 40, British naval intelligence chief "Blinker" Hall took it upon himself to leak the telegram to the Americans without reference to his own Foreign Office. The translated document is worth reading in its entirety.  Even after 100 years it seems breathtakingly provocative: 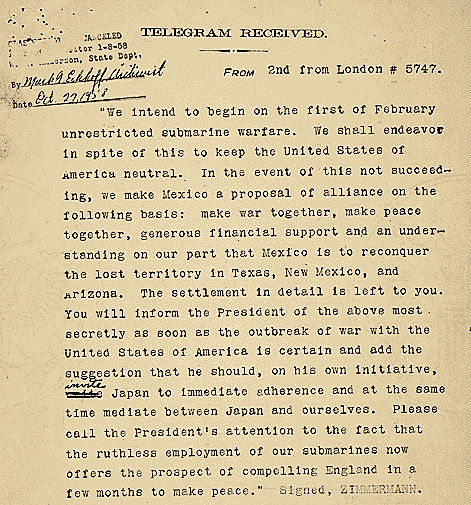 The disastrous decision to dispatch the telegram was taken by Foreign Secretary Zimmermann without reference to the German chancellor, the kaiser, or the German general staff. Zimmermann's action was typical of the dysfunctional German federation, which lacked a central policy-making body.

Moreover, the Foreign Ministry failed to investigate carefully the circumstances surrounding disclosure of the telegram. Zimmermann preferred to scapegoat German ambassador Heinrich von Bernstorff and the German embassy staff in Washington rather than admit to a rather obvious breakdown in cryptographic security. Thus, this leak was never sealed. Unlikely as it seems, Zimmermann, an experienced diplomat, and his staff were woefully ignorant of political forces at work in America, Mexico, and Japan. Thus, these abortive German efforts to get Japan (a British ally) and Mexico (then in the throes of a civil war) to attack the United States had no chance of success.

In contrast,U.S. secretary of state Robert Lansing effectively covered up the true provenance of the Zimmermann decryption. Like Wilson's diplomatic confidant and emissary Colonel House, he favored American entry into WWI on the side of Great Britain and saw Zimmermann's rash and ill-informed gambit as decisive in this regard. With the ongoing crisis over Germany's policy of unrestricted U-boat warfare and the mid-month abdication of Tsar Nicholas II and his replacement by the Provisional Government in Russia, the release of the Zimmermann Telegram gave President Wilson could counter almost all the domestic elements still objecting to America joining the war.  Before the month was out, he would call Congress into special session to request a declaration of war.

Source: The Zimmermann Telegram: Intelligence, Diplomacy and America's Entry into World War I by Thomas Boghardt