Detecting submarines under water was a major challenge during the Great War, tackled by a section of the Board of Invention and Research under Sir Ernest Rutherford. In 1915 Rutherford published a paper about a signaling system that would use sound waves beyond the range of human hearing. Rutherford and his colleagues performed secret experiments to test underwater microphones (hydrophones) in water tanks in labs at the University of Manchester. Later they used donated fishing trawlers to conduct full-scale tests at a research outpost on the south coast of Fife, Scotland.

The first practical device was the hydrophone, which, when lowered into the sea, could detect the sound of a submarine’s engine and the direction in which it lay. There was, however, no means of determining distance. In 1917 Rutherford traveled to the United States and formed an association with the American scientific community, which contributed to further research. Also, helpful was the research of French physicist Paul Langevin on echo-ranging.

The Hydrophone in Concept 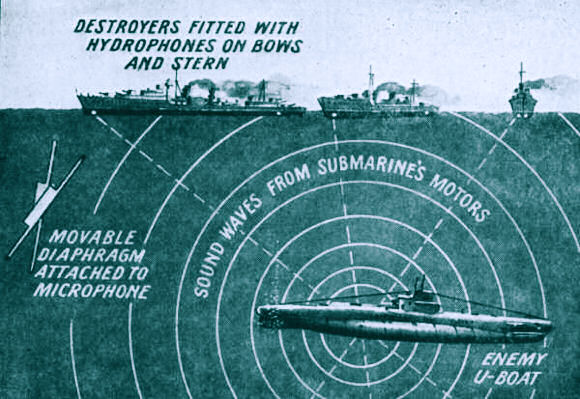 By 1918 a primitive means of detecting a submarine by use of a pulse of sound had been devised and the first set was at sea just before the Armistice. Known as “ASDIC” (Anti-Submarine Detection Investigation Committee) until the term was superseded in the 1960s by the American “Sonar” (Sound Navigation and Ranging) this device was not fully operational until 1924. Other means of detecting submerged submarines, by the use of sea gulls and later sea lions, although tried, did not prove practical.