Canada's Golgotha or the Legend of the Crucified Soldier 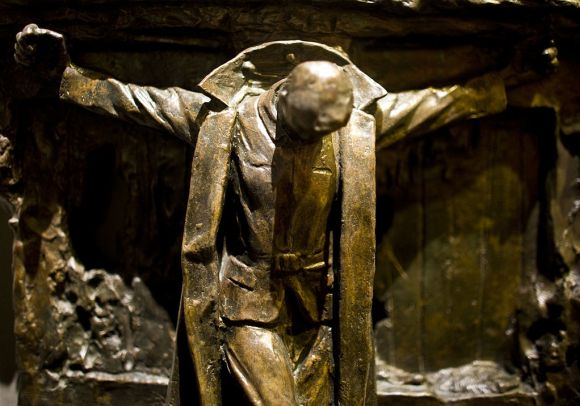 One famous legend of the Great War is still alive. It has many skeptics, but at least one 21st century champion of its validity and it is commemorated with the bronze sculpture shown above at the Canadian War Museum. The story of the Crucified Canadian first broke in May 1915 after the Second Battle of Ypres, during which Canadian forces played a major role. This was the first news account.

The Torture of a Canadian Officer

Last week a large number of Canadian soldiers, wounded in the fighting round Ypres, arrived at the base hospital at Versculles. They all told a story of how one of their officers had been crucified by the Germans. He had been pinned to a wall by bayonets thrust through his hands and feet, another bayonet had then been driven through his throat, and, finally, he was riddled with bullets. The wounded Canadians said that the Dublin Fusiliers had seen this done with their own eyes, and they had heard the Officers of the Dublin Fusiliers talking about it. (Times, May 10, 1915. Paris Correspondent.)

Apparently in response to skepticism over the first  account, another article soon appeared.


There is, unhappily, good reason to believe that the story related by your Paris Correspondent of the crucifixion of a Canadian officer during the fighting at Ypres on April 22, 1923, is in substance true. The story was current here at the time, but, in the absence of direct evidence and absolute proof, men were unwilling to believe that a civilized foe be guilty of an act so cruel and savage.

Now, I have reason to believe, written depositions testifying to the fact of the discovery of the body are in possession of British Headquarters Staff. The unfortunate victim was a sergeant. As the story was told to me, he was found transfixed to the wooden fence of a farm building. Bayonets were thrust through the palms of his hands and his feet, pinning him to the fence. He had been repeatedly stabbed with bayonets, and there were many punctured wounds in his body. I have not heard that any of our men actually saw the crime committed. There is room for the supposition that the man was dead before he was pinned to the fence and that the enemy, in his insensate rage and hate of the English, wreaked his vengeance on the lifeless body of his foe.

That is the most charitable complexion that can be put on the deed, ghastly as it is.

There is not a man in the ranks of the Canadians who fought at Ypres who is not firmly convinced that this vile thing has been done. They know, too, that the enemy bayoneted their wounded and helpless comrades in the trenches.  (Times, May 15, 1915. Correspondent, North France).

The story was never authenticated during the war, but it had gained something like mythic immortality.

It cropped up again in 1919, when a letter was published by the Nation  (April 12th) from Private E. Loader, 2nd Royal West Kent Regiment, who declared he had seen the crucified Canadian. The Nation was informed in a subsequent letter from Captain E. N. Bennett that there was no such private on the rolls of the Royal West Kents and that the 2nd Battalion was in India during the whole war.

The same year Canadian newspaper publisher and official Lord Beaverbrook commissioned the sculpture, “Canada’s Golgotha", as part of his project for the Canadian War Records Office in London to document the war. The sculpture was to be shown at an exhibition of war art at Burlington House, London, in 1919, just before the signing of the Paris Peace Treaty. The Canadian prime minister, Sir Robert Borden, asked for investigation into the incident; the German government asked the Canadian government to formally declare the story untrue or to produce evidence supporting it. The controversy caused the statue to be withdrawn from the exhibition. It was not shown again until a Canadian War Museum exhibition in 1992, entitled “Peace Is the Dream."

Surprisingly, in 2002 Peabody Award-winning documentary filmmaker Iain Overton reportedly uncovered correspondence from Canadian troops who saw such an atrocity take place firsthand. The soldiers even identified the victim as one of the own—Sergeant Harry Band. Letters to and from Band’s surviving sister even referred to the missing sergeant as the famous “crucified” Canadian.

The "real" Harry Band was 29 years old. He was Sergeant of 9 platoon, #3 Company, 48th Regiment (Highlanders), Canadian Infantry (Central Ontario Regiment), 15th Bn Division. His body was never recovered and he is remembered by a plaque on the Menin Gate (Ypres) Memorial, Belgium. That is all that we know for certain and, to honor the memory of all the Harry Bands who fought in WWI, perhaps that is enough to say about World War I and the Myth of the Crucified Soldier.

Sources: Falsehood in War-time: Propaganda Lies of the First World War by Arthur Ponsonby, 1928; I also drew heavily on a published paper by Nanaette Norris of the Royal Military College, Saint-Jean, "WWI and the Myth of the Crucified Soldier," downloadable at: https://www.researchgate.net/publication/290997988_World_War_I_and_the_Myth_of_the_Crucified_Soldier