Who Was Carl Adolf Maximilian Hoffmann? 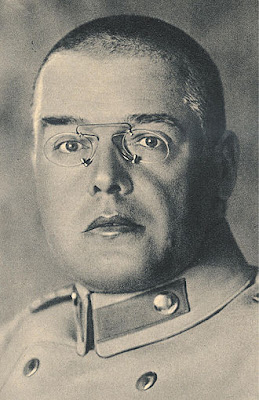 General officer Carl Adolf Maximilian "Max" Hoffmann (1869–1927) from Homberg an der Efze, Upper Hesse, was possibly Germany's most brilliant military mind on the general staff during the Great War.  He would be the dominant figure for the Central Powers during the negotiations at Brest-Litovsk.  Although tall, he did not have the look of prototypical German officer.  As one his early comrades described him: "He was almost the worst athlete, horseman and swordsman of them all...[but] he exceeded them in his terrifying appetite."  His career break came when he was sent to Russia to study its language and the tsar's army.  He evolved into the German Army's leading expert on Russian affairs and, as a result, he spent the entire First World War on the Eastern Front.

As a lieutenant colonel at war's outbreak, Max Hoffmann served as the Eighth Army's chief operations officer, helping plan the Tannenberg encirclement and the Battle of Masurian Lakes. He was promoted to Colonel in 1916 and served as Germany's Eastern Forces Chief of General Staff.  Playing a key role in halting the 1916 Brusilov  and the 1917 Kerensky Offensives, he was promoted to major general in 1917, by which time he was de facto commander of the Eastern Front Army under the figurehead Prince Leopold von Bayern.  He was thus positioned to play a central role at Brest-Litovsk.

Nicknamed "der Lange" (he was 6'4"), Hoffmann has been recognized by many (including himself) as the unaccredited genius behind the Hindenburg/Ludendorff duo, and he sharply criticized both famous commanders in his postwar memoir, The War of Lost Opportunities.  He died on 8 July 1927 in Bad Reichenhall, Oberbayern.