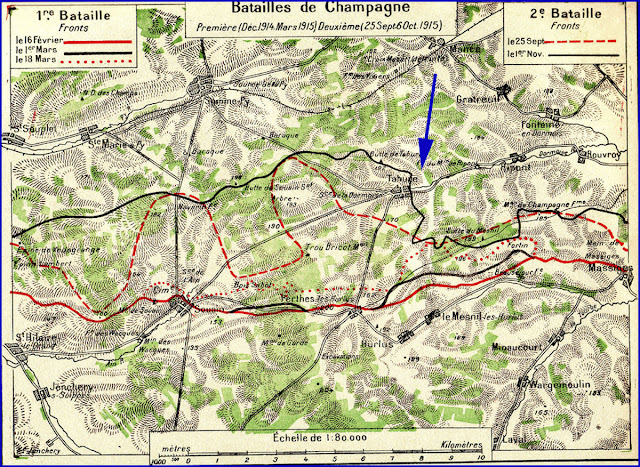 In English-language sources, the 1915 campaign on the Western Front is vastly under-reported.  For military historians the fighting there apparently seems especially pointless and the interest in and enthusiasm for the ill-fated Gallipoli operation has remained irresistible and unabated for a century.

The French Army carried the much-bigger load throughout the year because the British New Army was still being recruited and trained. Consequently the French incurred enormous casualties in Artois, north of Paris, and in the Champagne. However, in terms of the learning curve for the French Army, these battles must be studied for a full understanding of why breakthroughs at any location at this time of the war were almost impossible. The Champagne, especially, showed the need for an even greater investment in artillery and the development of a doctrine for advancing against multiple trench lines with elaborate barbed wire barricades.

This map from a French postwar magazine is well detailed, showing well-known sites like Navarin Farm and Main de Massignes, and nicely delineates between the First Champagne, which started in December 1914, and the Second, launched in September 1915. The width of the map covers about 12 miles.  The farthest cumulative advance in the two battles was 3 miles. France paid for the lessons learned in them with nearly a quarter million casualties.

For some additional details on the battles visit our earlier articles: