One of the best-known humor and satire magazines in Britain was Punch, or, The London Charivari. It ran from 1841 until 1992, with a brief resurrection from 1996 to 2002. In its heyday it helped coin the term "cartoon" with its clever and sometimes scathing illustrations. Its prose style was informal for the times and could happily rip apart pretense and hypocrisy. The title was taken from the "Punch and Judy" puppet or marionette shows dating back to the 1600s, and Mr. Punch, the hook-nosed curmudgeon of those shows, is also the main character in the magazine. Often including poetry, John McCrae's "In Flanders Fields" was first published anonymously in the 8 December 1915 edition of Punch.

Punch flourished during the Great War, and the magazine was more than ready to cover the conflict:

Though a lover of peace, Mr. Punch from his earliest days has not been unfamiliar with war. He was born during the Afghan campaign; in his youth England fought side by side with the French in the Crimea; he saw the old Queen bestow the first Victoria Crosses in 1857. . .Later on again he had watched, not without grave misgiving, the growth of the great Prussian war machine which crushed Denmark, overthrew Austria, and having isolated France, overwhelmed her heroic resistance by superior numbers and science, and stripped her of Alsace- Lorraine (vii).

This prologue introduces almost 300 pages of month-by-month commentary, including cartoons and poetry, summing up events for each month in Punch's unique and patriotic style. August 1914 opens thus:

Four weeks ago we stood on the verge of the great upheaval and knew it not. We were thinking of holidays; of cricket and golf and bathing, and then were plunged in the deep waters of the greatest of all Wars (1). 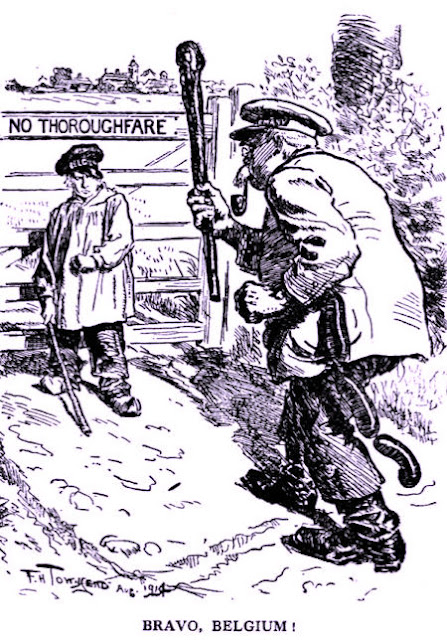 The month includes a one-page cartoon of a small, defiant boy with a small stick defending a gate marked "No Thoroughfare" being threatened by a large man with a huge cudgel, curved pipe in his mouth, and large sausages dangling from one pocket—obviously Germany—with the caption "Bravo, Belgium!"

Each month through November 1918 is similarly dealt with in four or five pages, with some three to five cartoons plus verse, and the book concludes with a retrospective epilogue that also looks forward to the year ahead. You could get a lot of enjoyment just browsing through the cartoons,but be warned that some of them contain a distinctly British sense of humor.

Typical of Punch's commentary as it follows the war's events is that of December 1915:

Things have not been going well in the East. The Allies have been unable to save Serbia, Monastir has fallen, and our lines have been withdrawn to Salonika. The experts are now divided into two camps, the Westerners and the Easterners, and the former, pointing to the evacuation of Gallipoli, are loud in their denunciations of costly "side-shows"(66).

Yet the fortitude of the British soldier must also be emphasized, or in the words of Mr. Punch "The 'philosophy of Thomas' is inscrutable…and he derives satisfaction from comparisons:"

If we're standin' in two feet o' water, you see
Quite likely the Boches are standin' in three;
An' though the keen frost may be ticklin' our toes,
'Oo doubts that the Boches' 'ole bodies is froze? (66) 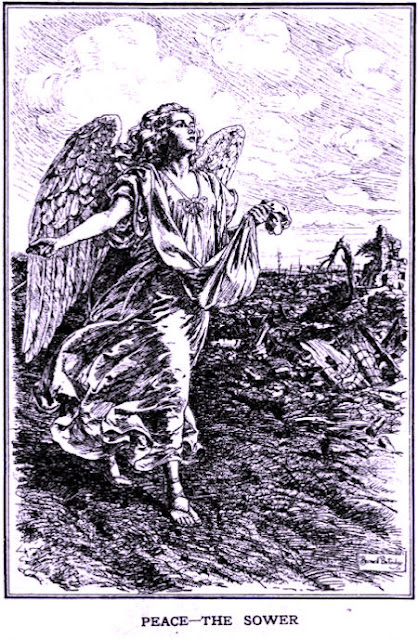 An accompanying cartoon shows a wounded and bandaged (but ever-generous) Tommy berating a German prisoner with "Look what you done to me, you blighters! 'Ere-'ave a cigarette?" (68). The beginning of the Somme battle is treated in the same phlegmatic manner in July's entry for 1916:

. . . July has brought us a new experience-the sound fifty or sixty miles inland in peaceful, rural England, amid glorious midsummer weather, of the continual throbbing night and day of the great guns on the Somme, where our first great offensive opened on the 1st, and has continued with solid and substantial gains, some set-backs, heavy losses for the Allies, still heavier for the enemy (97).

A full-page cartoon for the same month shows a laughing Tommy bandaging his own wrist wound with his rifle in the crook of his arm and a German helmet pinned on the bayonet, the caption below stating in all capitals: WELL DONE, THE NEW ARMY. The following month, August, includes a short poem "from an R.F.C. man":

Returning from my morning fly
I met a Fokker in the sky,
And, judging from its swift descent,
It had a nasty accident.
On thinking further on the same
I rather fear I was to blame (104).

Back in August 1915 the magazine had complained that “The war of Notes goes on with unabated energy between Germany and the U.S.A.” and also recorded that “Mr. Winston Churchill, the greatest of our quick-change political artists, is said to be devoting his leisure to landscape painting. The school that he favors is not publicly stated.” (50). However, April 1917 finds Mr. Punch less tongue-in-cheek when he reports that

Once more the rulers of Germany have failed to read the soul of another nation. They thought there was no limit to America’s forbearance, and they thought wrong. America is now ‘all in’ on the side of the Allies. The Stars and Stripes and the Union Jack are flying side by side over the Houses of Parliament. On the motion introduced in both Houses to welcome our new ally, Mr. Bonar Law…declared that the New World had stepped in to redress the balance of the old; Mr. Asquith…lauded the patience which had enabled President Wilson to carry with him a untied nation; and Lord Curzon quoted Bret Harte (145).

A drawing of a huge eagle, talons outstretched and swooping away from the Statue of Liberty, accompanies this month’s entry.

Thus it goes with Mr. Punch, as this engaging volume follows the course of the Great War with popular historical analysis, humor, irony, many telling cartoons and plenty of poetry—much of it moving and clever. I can recommend Mr. Punch’s History of the Great War to anyone who would enjoy a chronicle of the War laced with the wit and wisdom that was available to the British reader on the home front.