Ollie Olive, Private, Co. K, was operating a captured machine gun, holding out against one of the counterattacks along the railroad spur. As described by one of his comrades to his family after their return from France: "Ollie climbed into a tree to have a better line of fire on the enemy with the machine gun. His position was located by the enemy and with a withering fire they cut him down. He didn't suffer but was killed outright."

Olive fell at the age of 19, defending his comrades, his body was recovered and returned to his family. Olive is buried at Arlington Cemetery.
Tom Morgan's Hellfire Corner 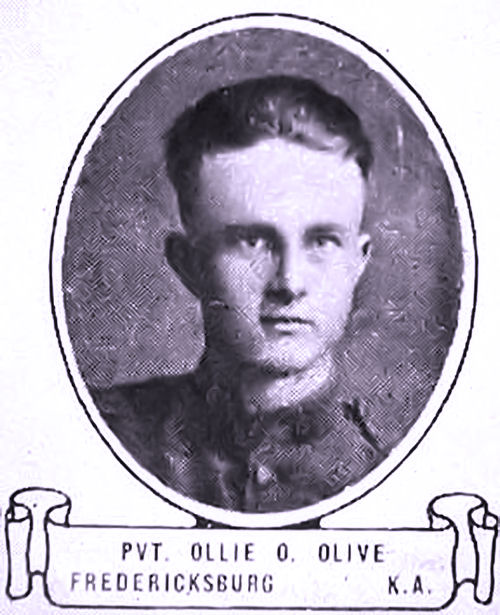 They Had a Rendezvous with Death

The fall weather finally providing a relief to the summer heat and Armistice/Veterans day just around the corner I took time this weekend to finish up a little business that I seem to have put off again and again. I planned to visit the grave of a fellow Virginian from my home town of Fredericksburg, Virginia, who was lost in the Great War.

My interest began some years ago while visiting our World War I memorial with my fellow VFW members. The name of Ollie O. Olive seemed to leap from the tarnished bronze plaque, and I wondered, who was he, how did he meet his fate?

My fascination continued as I interviewed his surviving sisters and became familiar with the family's story of their lost brother. During trips to France I visited the battlefield and found the location where the men from Fredericksburg fought during World War I. I had even located a picture of Ollie in uniform.

Ollie was a young man whose family worked a small farm just outside of town. He was a frail and sickly boy, nearly crippled at times with what the family described as the rheumatism. In 1916 Frederickburg's National Guard regiment, (The Washington Guard, 2nd Virginia, Company K), mustered into service for the Texas border. Ollie fancied himself as a soldier but was disappointed when he was not accepted.

In the ensuing months the papers were filled with reports and letters from Company K as they served on the border. They returned in February of 1917 to a parade through town as the community crowded into the streets welcoming the returning heroes. The men of Company K marched through town before being demobilized and returning to civilian life. But as fate would have it, Ollie's chance to join up came again in just a few short months.

With the declaration of war in April of 1917, Company K was once again called up. The paper was full of advertisements calling for the enlistment of able bodied men to fill the ranks for service in Europe. Ollie went to the recruiter and this time convinced them that he would fill the bill. Without even a chance to return and say good-bye to his family, Ollie began the adventure which would culminate in a strip of shell-torn forest on a French farm, north of Verdun.

Company K, became part of the 116th Infantry, 29th Division, and was selected to assault the heights overlooking the sleepy Meuse River which meandered across the blood drenched battlefield of the Western Front. Occupied by the enemy since 1914, these heights provided a commanding position from which German batteries raked the allied troops attacking through the Argonne Forest. On 16 October 1918 Ollie and his fellow Virginians joined an attack across an open field against the German lines. Machine guns played their deadly tattoo, cutting through the Doughboys like a scythe. Ollie and the other survivors of Company K gained the woods sheltering the enemy line. As Ollie's comrades related the story to his family, he mounted a captured machine gun in the shattered stump of a tree and raked the Germans in counter attack after counter attack. Finally the enemy located his position, and as the soldier in Alan Seeger's epic World War I poem, Ollie kept his rendezvous with death.

After the war, as the victory celebrations passed and the horror of war dimmed in the veterans' eyes, Ollie was returned. His family selected Arlington Cemetery as his final resting place and there he was laid to final rest.

As I walked the distance from the reception center to Section 18 in the back corner of the grounds, I recalled my visits to the battlefield and that same strip of woods where Ollie fought and died. I recalled the moss covered trenches and collapsed bunkers that still run through that section of battle line, the rusted equipment poking through the forest floor and the barbed wire which still lay in coils in the tangled underbrush. I also recalled the details of  Ollie's unselfish sacrifice.

I reached Section 18 and looked for Ollie's grave, #3240, I also became very aware that all about me were soldiers' graves that had one thing in common. These were the dead of the Great War, the fallen, those who had given their all in the War to End All Wars...Names such as William Penny, 318 Infantry, 80th Division, Leroy Small 115th Infantry 29th Division, 167 Infantry of the (Rainbow) Division, Second Division. Boys from Wyoming, New York, Oregon, and so on and so on..all of which were dated 1917–1919. Then I found plot 3240, Ollie's unassuming white marble stone was inscribed "Ollie O. Olive, 29th Division, Virginia, October 1918."

I looked around me, there in all directions row after row of white marble stones stood as mute testimony to those who slept below. Ollie had kept his rendezvous with death, as all the men who lay in this yard, they had given their lives for their country, for democracy, for mankind.

When November 11th approaches and we commemorate the Armistice of 1918 as well as veterans everywhere, remember Ollie and his comrades. For they have passed to us the torch of freedom.

Sources: The Doughboy Center and Find a Grave