I can't fathom all the criteria that Google uses to rank websites, so I can't explain why this is so, but if you type in "St. Mihiel Offensive" + map in the Google search box, at the top of the results list you will get (at least I got) two links to this map from Library of Congress pages.  You can click on the image to expand it, but I think—that unless you have read a helluva lot about the operation—you will be utterly mystified as to what happened there in September 1918 when Pershing's First Army launched its initial offensive. 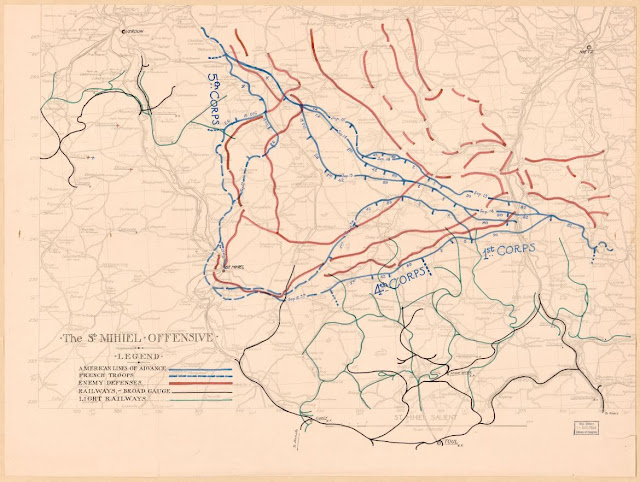 On the other hand, if you connect to the third entry on the list, which is the Wikipedia article on the St. Mihiel Offensive,  you will find it uses the map below.  If you were to spend an afternoon browsing the Web, you would discover  that this simpler map is used on numerous  sites (sometimes in modified form) by historians, bloggers, genealogists, and others with various levels  of insight on the battle.  On the other hand, you will find the usage by others of the Library of Congress recommended map is approximately zero. Why do World War I researchers find the lower map handier? Primarily, this is because the cartographer's intention was that it would help readers understand the battle.  I can say this categorically, because I was the designer of this map.  In 1998—that other century, long past—I was putting together my first WWI website, The Doughboy Center.  The St. Mihiel map is one of a series I did to accompany the articles on the major AEF battles. There was a photo/editing program bundled into an early version of Windows that I used to draw this.  If you think it looks a little shaky, that's because the mouse was shaking as I dragged it along the mouse pad.

In looking at it today, frankly, I'm a little embarrassed about how amateurish it seems and with the inaccuracies with the exact placement of the units and towns. But it seems to have taken a life of its own and it's out of my hands now. The People have spoken. Nonetheless, the map still gives a generally accurate depiction of the opening and culmination, and what happened in between. It clearly conveys this information: On  12 September 1918, three American corps and one French attacked an enemy salient located east of the Meuse River and and southwest of the Woevre Plain, reducing it in five days. Details include a scale, directions of the advances, and  locations of key features, towns, and  the final front line.  Pershing had to stop the troops there to re-focus his First Army on the coming Meuse-Argonne Offensive.

Even though some of folks who have borrowed my map have forgotten to mention where they found it, I'm very gratified that so many have found it useful over the years. By the way,  I'm spending some time updating The Doughboy Center so you're invited to visit it.  You'll see some of the other maps by my alter-ego, that internationally recognized  cartographer.  LINK