Map Series #6: The Isonzo Sector of the Italian Front

I found this map in a compilation of New York Times Mid-Week Pictorials that were published during the war.  After three visits to this area, I can say that—though it has many micro-errors and misplacements—it does that best job I've ever seen of capturing the size, terrain, and relative positioning among the key locations I've ever seen for what was the most important sector of the war on the Italian Front.  Begin your review by tracing the Isonzo (now Soca) River from the Gulf of Trieste past the towns of Gorizia, Tomin[o] Caporetto, and Plezzo to the Julian Alps. These towns all played important roles during the war.  Then examine the transitional area between the sea and the mountains which features two rugged plateau with their own mountain peaks, the Bainsezza and the Carso.  The latter was the great killing ground of the Italian Army during the war. The troops deployed here were trying to get to Trieste and in 11 battles only got about a quarter of the way.

I've highlighted some of the names of important locales and circled two sub-sections in yellow that needed to be delineated.  The lower section is where the principal fighting (not all) occurred for the 11 battles of the Isonzo, which were all Italian offensives aimed strategically at capturing Trieste.  The upper area is where the Austro-German Caporetto breakthrough (also known as the 12th Battle of the Isonzo) took place in October 1917.  I don't believe Caporetto had been fought yet when this map was created. As you will see below,  you will need to open the map to be able to read it. The original is 1600 x 2400 pixels. 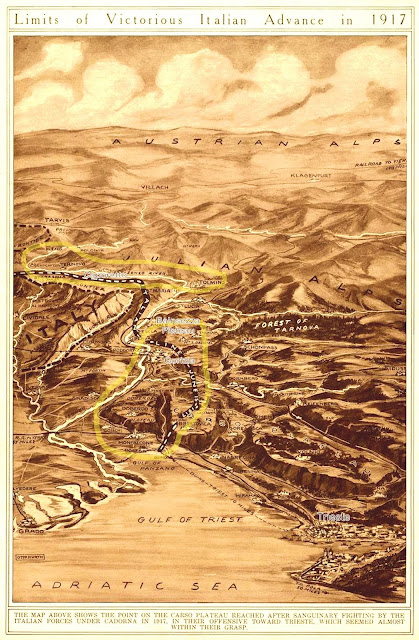