Ploegsteert Wood was a sector of the Western Front in Flanders in World War I, part of the Ypres Salient on its southern edge. After fierce fighting in late 1914 and early 1915, Ploegsteert Wood ("Plugstreet " to the Tommies) became a relatively quiet sector until 1917's Battle of Messines. From January to May 1916, Winston Churchill served in the area as commanding officer (Lieutenant-Colonel) of the 6th Battalion of the Royal Scots Fusiliers. When he first arrived in Flanders, he wrote to Clemmie of:

[F]ilth and rubbish everywhere, graves built into the defences & scattered about promiscuously, feet & clothing breaking through the soil, water and muck on all sides; & about this scene in the dazzling moonlight troops of enormous rats creep & glide, to the unceasing accompaniment of rifle & machine guns & the venomous whining & whirring of the bullets which pass overhead.

His was not an especially active sector, but he was known to spend time in the frontline trenches, ventured into to no-man's-land, and at least once came under machine gun fire.

However, Churchill's closest visit from death during his service on the Western Front came when he was called to the rear for a meeting with a general. Returning, disgusted that the meeting never took place, he discovered that the shelter he had vacated was destroyed by artillery fire minutes after he had departed. 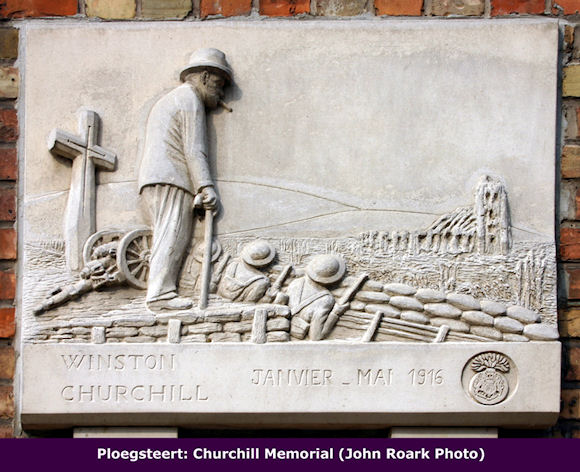