Even though, in fact, more men were killed by artillery fire than by bullets in the Great War, the war is remembered and is most strongly held in our collective memory as a machine gun war. The man who gave the world the machine gun was an American inventor named Hiram Maxim. 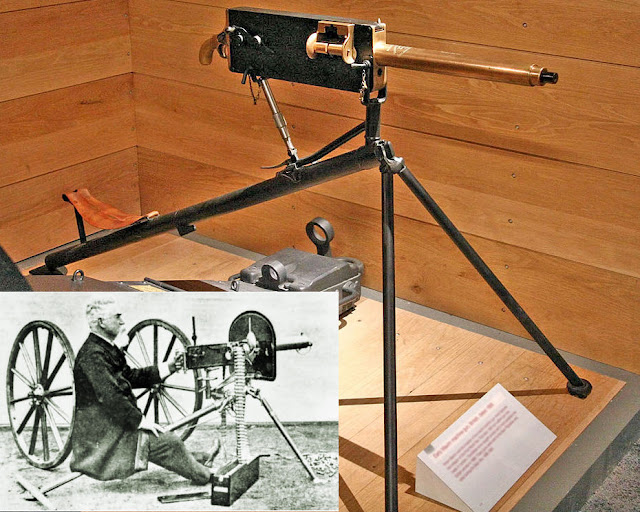 Hiram Maxim (Lower Left) with an Early Model of His Gun; Above Is the Model Purchased by the British Army in the 1890s

Born in 1840 in Sangersville, Maine, Maxim was apprenticed at 14 to a carriage maker. While learning that trade, he exhibited a knack for invention, designing a mousetrap that automatically reset and rid local mills of rodents. He obtained the first of his 271 patents at age 26 for a curling iron. By his thirties, Maxim was becoming chief engineer of the United States Electric Lighting Co. in New York, for which he introduced carbon filaments for electric light bulbs. At the 1881 Paris Exhibition, he demonstrated an electric pressure regulator and was awarded the Legion d'Honneur. That same year he arrived in England to reorganize the London offices of the U.S. Electric Lighting Company.

At the Paris Exhibition in 1881, a man told Maxim that if he wanted to make a fortune, he should invent a machine that would help these Europeans kill each other. Maxim would go on to sell his machine guns to European countries on the eve of World War I, changing the nature of combat.

Maxim harnessed a bullet's recoil power to create a portable machine gun that needed only one barrel to fire all of its bullets automatically. In 1884, Hiram Maxim built the first effective machine gun, which revolutionized warfare. Its precursor, the Gatling gun, was a hand-driven, crank-operated gun with first six, later ten, barrels. Maxim's innovation was to harness the recoil power of each bullet, a force strong enough to eject the used cartridge and draw in the next one. Structured in this way, the portable gun needed only one barrel to fire all of its bullets automatically. To maximize the gun's effectiveness, Maxim also developed his own smokeless powder, cordite. In 1884, he founded the Maxim Gun Company in Britain to produce his new weapon. Five years later, he licensed it to the British Army in 1889; the following year the Austrian, German, Italian, Swiss, and Russian armies also incorporated it into their firearm auxiliary.

In 1896, the Maxim Gun Company was bought out by Vickers, Ltd., of which Maxim became a director. The Vickers machine gun would become standard issue of the British Army during World War I. 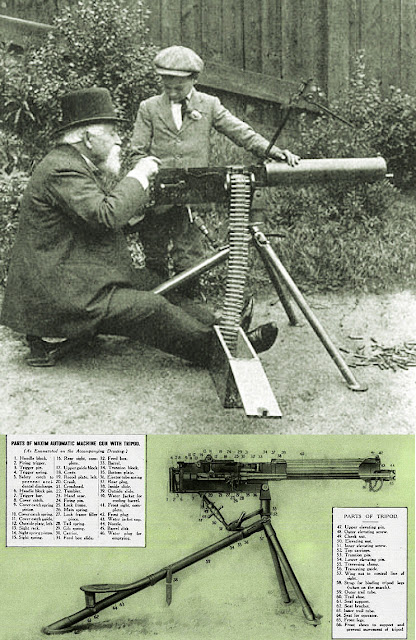 Maxim and His Grandson Examine a WWI-Era Maxim Machine Gun; The Diagram Below Shows All 66 Parts of Another Model

Later in life Maxim turned his attention from warfare to flight, building a steam engine-powered airplane that briefly rose from the ground. While he was unable to achieve sustained flight, his amusement ride, the Captive Flying Machine, became a staple of British fairgrounds. Maxim died on 24 November 1916, as the Battle of the Somme, where over one million soldiers fell in four months of machine gun warfare, was winding down.