Isaac Rosenberg's "In the Trenches"

Isaac Rosenberg’s roots were probably the humblest of all the war poets. He was born in 1890 to impoverished Jewish refugees from Lithuania and had to leave his London school at 14 to become an apprentice to an engraver. He found he was gifted in both painting and poetry, but eventually leaned toward poetry. In 1915 he enlisted in a Bantam Battalion since he was under the required height for a regular battalion. Although his background and feelings were strongly pacifist, he wrote “there is certainly a strong temptation to join up when you are making no money.” He was never a happy soldier, but his best poetry came out of the war. He was killed on 1 April 1918, and his body was never found. 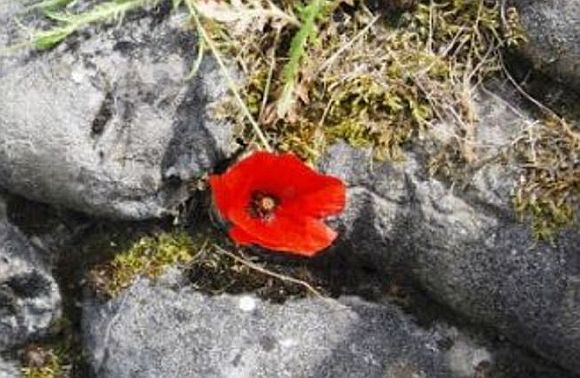 That winked on the ledge.

I stuck one through,

I gave to you.

And screwed out our jest,

And tore the poppy

You had on your breast…

I am choked… safe… dust blind, I

Although not as popular as some of his other (and longer) poems, “In the Trenches” gives a brief and poignant vignette of what could happen at any time. The poet and companion are moving through a trench where nothing is gentle. He "snatches" two poppies (implying they are torn out) from where they were manifesting at least some temporary loveliness on the parapet. He playfully adorns himself with one and gives the other to his pal. We note that the poppies are "bright red" and "blood red."

Their momentary playfulness is interrupted by a narrow spot in the trench. Squeezing through, his friend’s poppy is torn off his chest by rubbing against the sandbags. Then comes the terrifying and fatal shell by which the friend is ‘smashed’ and to the horror of the poet, poppy and blood are strewn over the floor of the trench. No further comment is possible. What more could one say?