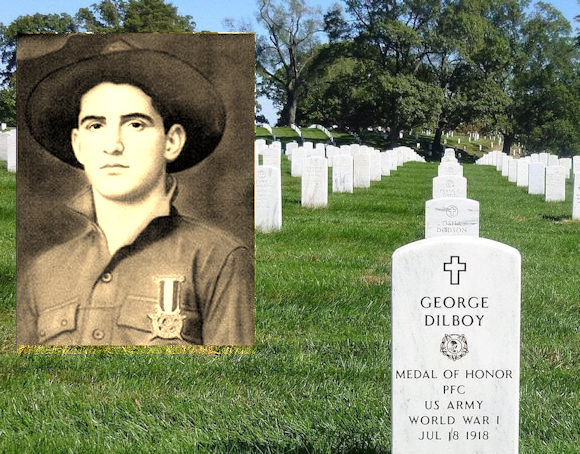 George Dilboy (Giorgos Dilbois) was born on 5 February 1896 in the Greek town of Alatsata near Smyrna in Asia Minor (modern-day Turkey).  In his short life, he was destined to serve in the armed forces of both his native and adopted nations, and to be  awarded America's  Medal of Honor, to be interred at last at Arlington Cemetery.

Dilboy and his family immigrated to New Hampshire in the United States in 1908. In 1912, at the age of 16, he returned and fought for Greece in the Balkan Wars of 1912–13. After serving his ethnic homeland, he returned to the U.S, where he joined the New Hampshire National Guard and served in the Mexican Border Campaign. But after World War I broke out—and when the U.S declared war against Germany in 1917—Dilboy's National Guard unit was called up for the U.S Army and joined the 103rd infantry regiment, 26th Division.

In the photo below, Dilboy lies reclined in front with his fellow soldiers at Camp Keyes in Concord, New Hampshire. (Photo/The Story of George Dilboy by Richard Rozakis) Before turning 22 years old, Dilboy had already fought in four wars on three continents. In 1918, the Asia Minor native fought in the Battle of Belleau Wood in France.

The following excerpt is from his U.S. Army Medal of Honor citation:

After his platoon had gained its objective along a railroad embankment, Private First Class Dilboy, accompanying his platoon leader to reconnoiter the ground beyond, was suddenly fired upon by an enemy machine gun from 100 yards. From a standing position on the railroad track, fully exposed to view, he opened fire at once, but failing to silence the gun, rushed forward with his bayonet fixed, through a wheat field toward the gun emplacement, falling within 25 yards of the gun with his right leg nearly severed above the knee and with several bullet holes in his body. With undaunted courage he continued to fire into the emplacement from a prone position, killing two of the enemy and dispersing the rest of the crew.

Dilboy died on 18 July 1918 due to his wounds. He was initially buried in the Aisne-Marne American Cemetery in France, but at the request of his father he was later buried at his birthplace of Alatsata in Turkey, where thousands attended his funeral.

In January 1919 the Commanding General of the Northeastern Department presented his Medal of Honor to his father, Antonios. The distinction made him the first Greek-American to earn America’s highest decoration for valor.

"Under other circumstances I would have shed tears because of my son’s death,” his father said. “But when I learned of the manner in which he died, I was proud that he had given his life with honor the cause of his adopted country, the United States. . . We came to this country from Smyrna, where my boy and other children were born. . . We know and have felt the persecutions of Turkey."

In 1922 when Turkey’s Kemalist army occupied Alatsata, Turkish soldiers broke open Dilboy’s coffin entombed in the Church of the Theotokos, desecrating Dilboy’s remains and the U.S flag.  President Warren G. Harding became outraged and ordered a U.S warship to recover the remains and return them to the U.S. Harding also demanded and received a formal apology from the Turkish government. Following their return, Dilboy's remains were interred at Arlington National Cemetery on 12 November 1923.

George Dilboy received honors from three U.S presidents: Woodrow Wilson, who signed the authorization awarding him the Medal of Honor; Warren Harding, who brought him back; and Calvin Coolidge, who presided at his final military burial.

He is remembered at a number of sites in the U.S. A bronze monument of Dilboy was built outside the Somerville City Hall in Massachusetts. The monument consists of a bronze bust standing on a granite base and was created in 1930 by the Boston-based Grenier Studio. The Order of AHEPA presented it to the city. Somerville’s Dilboy Stadium was also named in the fallen soldier’s honor. On 24 May 1942, the George Dilboy Memorial Foundation erected a memorial to Dilboy at the Hines Veterans Administration Hospital in Hines, Illinois, a western suburb of Chicago. In 2009, a U.S. Citizenship and Immigration Services facility in Detroit was named in his honor.

Thanks to Demos Lamprinakis for bringing this article to our attention.