Souchez: Annihilated by War and Reborn

In 1915, a little village in northern France strung out  along the Bethune-Arras road named Souchez  found itself on the front line. Earlier in the year, the French Army had secured the heights of Notre Dame de Lorette just to the west, and the sector commander, Ferdinand Foch, was determined to continue on to the next strategic point, Vimy Ridge, just 1.7 miles to the southeast.  Two offenses coordinated with British attacks to the north would be mounted by the French in 1915, one in May, a second in September. Both would fail to gain Vimy Ridge. Souchez was finally captured. But only after the second assault was it so utterly leveled. 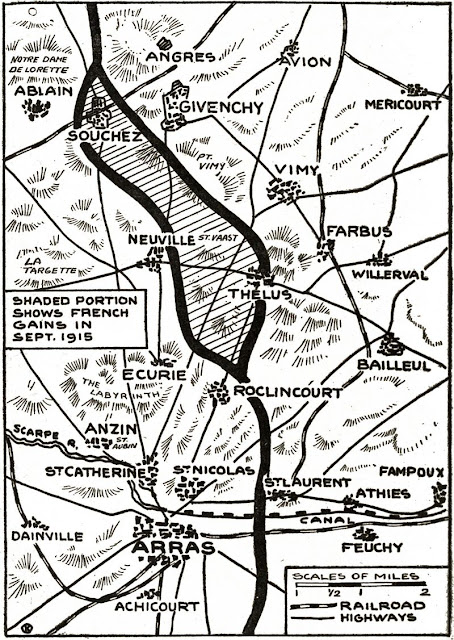 Here are some contemporary descriptions of the trauma suffered by Souchez in the Great War.

The commune of Souchez was particularly affected during the First World War, which earned it to be mentioned to the Order of the Nation in 1920 and to receive in 1924 La Croix de Guerre (which can be seen on the pediment of the town hall).

It must be said that our municipality had well deserved it because as Fleury Cresson says in her book "Souchez through the ages". "Despite all the misfortunes having befallen Souchez during previous centuries, nothing however compares to what happened to him between the years 1914-1918! His martyrdom was so great during these four years that his name was known to the whole universe, and that the same name furnished for months the communiques of the French high command. The sufferings of those who fought there were unspeakable and its population knew a frightening ordeal ".

The landscape is so hideous, so out of nature that I wonder if I am not dreaming: it is a vision of an infernal nightmare, the dismal setting of some fantastic tale by Edgar Poe,

They are not ruins: there is no more wall, no more street, no more form. Everything has been pulverized, leveled by the pestle. Souchez is nothing more than a disgusting mush of wood, stones, bones, crushed and kneaded in the mud. (...) A few waves of ruins emerge alone from the mud; nevertheless the enemy shells persisted in ruthlessly searching the bowels of the murdered town ...

The village has disappeared. I have never seen such a disappearance of a village. Ablain-Saint-Nazaire and Carency still keep a form of locality, with their broken up and truncated houses, their courtyards filled with plaster and tiles. Here, within the framework of the slaughtered trees - which surround us, in the middle of the fog, with a specter of scenery - nothing has any shape: there is not even a section of wall, a gate, a gate. , which is erected, and we are astonished to note that through the tangle of beams, stones and scrap, are cobblestones: it was here, a street!

It looks like a wasteland and dirty, swampy, near a city, and on which it would have dumped for years regularly, without leaving empty space, its rubble, rubble, demolition materials and old utensils : a uniform layer of rubbish and debris among which one plunges and one advances with great difficulty, of slowness. The bombardment changed things so much that it diverted the course of the mill stream and the stream runs haphazardly and forms a pond on the remains of the small square where there was the cross.

Nevertheless, a century later, Souchez is a thriving country village of about 2,500. Its rural economy is supplemented by World War One tourism.