In the fall of 1916, that most industrious lieutenant, Erwin Rommel, found himself deployed with the Württemberg Mountain Battalion to the Vosges Mountains in Alsace, about 25 miles north of the Swiss border.  In his 1937 somewhat self-promoting case study book known in some sources as Infantry Attacks, he discusses a successful trench raid  he had commanded while posted there. In the essay, which uniquely covers the attack from concept to its aftermath, he reveals the thoroughness, self-confidence, and determination to "lead from the front," that would serve him throughout his service in both World Wars. In his book, he heads this section, "Raid on 'Pinetree Knob' Sector." I've been unable to locate its exact location, so the  position shown on the map below is only approximate and the trench photos here are all from the general sector, not specifically Pine Tree Knob.

Early in October 1916, several units, among them the 2d Company, were ordered to prepare plans for raiding the enemy to take prisoners. My Argonne experience showed me that this type of work was dangerous, difficult to organize, and usually resulted in a high casualty list and, for this reason, I held my boys in check as far as raids were concerned. Once ordered, I pitched in and started planning. To begin with, in order to determine the feasibility of working into the enemy position, I went out on reconnaissance, accompanied by Staff Sergeants Büttler and Kollmar. We crept and crawled through the tall and fairly dense fir forest toward a French sentry post, established at the upper end of a forest path leading up toward the enemy. The path was overgrown with tall grass and weeds and we were most careful in crossing it some fifty yards from the enemy. Once across, we slipped into a ditch and wormed our way forward. 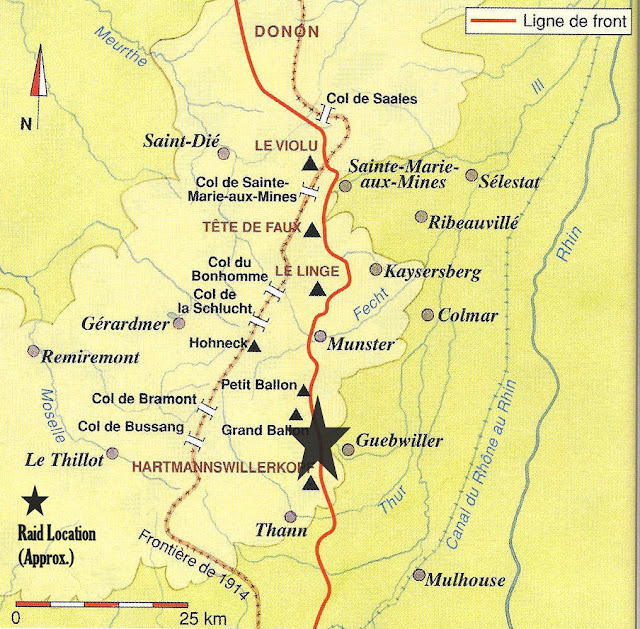 Cutting through the mass of barbed wire with cutters was a back-breaking job requiring a maximum of caution. Night began to fall and we heard, but could not see, the French sentry move about his post. It was slow work getting through the wire, especially since we could only cut the lowest strand of wire. Eventually we reached the middle of the entanglement. At this point the French sentry exhibited a certain amount of restlessness and cleared his throat and coughed several times. Was he afraid or had he heard us? If he tossed a hand grenade into our ditch, it was curtains for the three of us. To make matters worse, we could not move, let alone defend ourselves. We held our breath and let the tense moments tick by. As soon as the sentry quieted down, I began to withdraw. By this time it was totally dark. In crawling back, we snapped a few twigs and this inadvertent act received immediate recognition. The enemy alerted his entire position and for minutes sprayed the entire landscape between positions with all varieties of small arms fire. We hugged the ground and let them pass over us. When silence fell, we resumed our journey and returned without suffering any casualties. Our reconnaissance proved conclusively the difficulty of raiding in those wooded sectors.

Next day, I proceeded to examine the possibilities of getting into a hostile position called Pinetree Knob, and found the situation more favorable. Under cover of darkness, the position entanglements could be reached silently by moving up a grass-covered glade. However, the barriers consisted of three separate belts of wire requiring hours to cut. Only five hundred feet separated our trenches from those of the enemy. It took several days and nights of careful reconnaissance before we were able to determine the exact location of two sentry posts on Pinetree Knob. One was located in the center of a glade in a concealed sentry box; the other was two hundred feet to the left on a rock ledge from which it was easy to cover the surrounding terrain with fire as well as with visual observation. Only on rare occasions did we receive machine gun fire from this part of the sector.

Any operation in this direction moving over grassy terrain totally devoid of cover required a moonless night. During the next few days and nights we studied the details of the approaches into the Pinetree Knob position and observed the personal habits of the garrisons of both outposts. In doing so, we carefully avoided drawing our opponent's attention to the impending expedition. I based my plans on the results obtained through our reconnaissance. This time I did not intend to sneak into the positions proper; I proposed to negotiate the wire field midway between the two posts, get in this trench and then strike them in flank or preferably in the rear. The raid required a force of twenty men, for we had to split up on arrival in the hostile trench. Also I had to plan to get my raiding parties out and I had to allow for a possible attack by the local trench garrison. A wire-cutting party was to be placed opposite each enemy outpost. They were to crawl up to the edge of the wire and remain there doing nothing until the raiders started cleaning out the trench with pistols and hand grenades or until signaled from within the captured outpost positions. Not until one or other happened were they to start cutting the wire and make a path for the raiders' escape.

I discussed the raid with the subordinate leaders, using sketches and pointing out the terrain from the trench. The various detachments started their preparations by holding rehearsals close behind our positions. October 4 was a cold and nasty day. A strong northwest wind drove clouds through our 3500-foot position. Toward evening the wind changed into a storm, and a rain of cloudburst proportions beat down. This was weather I had been praying for. By that time the French sentries had their heads deep in their coat collars and had taken refuge in the most sheltered corner of their sentry holes, thus reducing their efficiency as guards. In addition, the wind would drown out most of the noise occasioned by our approach and wire cutting. I reported to Major Sproesser my intention to carry out the raid during the coming night and received approval.

Three hours before midnight, in a pitch black, stormy and rainy night, I left our positions with my three detachments and crawled slowly toward the hostile position. Soon the wire-cutting detachments under Staff Sergeant Kollmar and Lance Corporal Stetter left us and moved off to the right and to the left. Lieutenant Schafferdt, Staff Sergeant Pfeiffer, and I went with the assault detachment and crawled behind our wire-cutters. The other twenty soldiers followed in single file at three-pace intervals. We crawled noiselessly toward the enemy. The wind howled and whipped rain into our faces, and soon soaked us to the skin. We listened anxiously into the night. Single shots rang out here and there and an occasional rocket flare flickered in the darkness, but the enemy remained quiet. The night was so dark that the silhouettes of the surrounding rocks were indistinguishable at more than sixteen feet.

We reached the first obstacle and the hard work began. One of our trio wrapped a rag around every strand before using the cutters. Another took the tension off the wires, and the third slowly cut the wire through. The ends of the cut wire were bent back carefully to prevent betrayal by the noise which would result were they allowed to fly back unimpeded. Every move had been tested beforehand.

We stopped work occasionally and listened intently into the night before starting our tiresome job again. In this manner, inch by inch, we cut our way through the high, wide and very finely lace French wire. We had to content ourselves with cutting a path through the lower strands only.