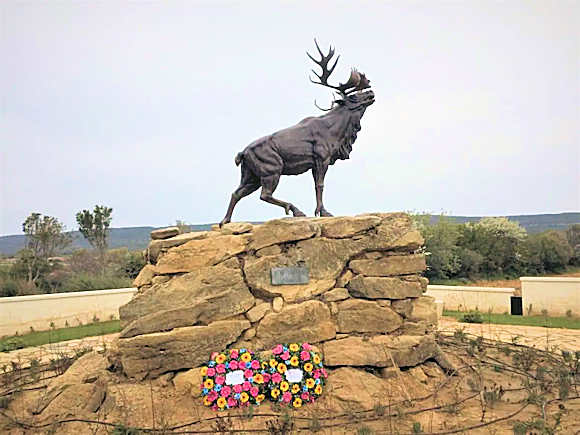 Spread across the Western Front battlefields are five bronze Caribous, all memorials to the men of Newfoundland who fought and  who died there in the Great War. Before arriving on the Western Front, however, these men as part of the 29th Division had fought in Gallipoli.  For many years there had been an effort to install a Newfoundland Caribou memorial there.  In April 2021 it finally was dedicated across the road from the Hill 10 Commonwealth War Graves Cemetery in the Suvla Bay sector.
After almost a year of training, the Newfoundland Regiment learned it would be part of the 29th Division of the British Army fighting in Gallipoli. After a short stay in Egypt, 1,076 Newfoundlanders came ashore along the shores of the Dardanelles Strait on 20 September 1915. The flashes and the sounds of distant artillery and rifle fire quickly told them they were finally in a war zone. The next day they were shelled by Turkish artillery as they huddled in their shallow dugouts for protection—their welcome to Gallipoli.
The young Newfoundlanders had arrived hoping for action and excitement but they were soon disappointed. They spent the first months digging trenches and keeping long night watches, spending time on the front line learning trench warfare techniques from the ANZAC and British forces that had been fighting there for months.
Conditions were bad. Enemy fire and life in the trenches made the situation miserable for the Newfoundlanders. Even getting enough to drink was difficult; sometimes soldiers had to get by on less than a cup of water a day. The weather was harsh and unpredictable. The heat brought swarms of flies that helped spread diseases like dysentery which hit the Newfoundlanders hard. It could also be surprisingly cold as it was the worst winter in the region in four decades. Weeks of heavy rains and wind battered the soldiers, turning trenches into flooded ditches. When the rains finally stopped, the weather turned very cold and caused many cases of frostbite. Despite the difficult conditions, the Newfoundlanders persevered and earned their first battle honor when they captured Caribou Hill (a high point used by Turkish snipers) in November, with three men earning medals for their bravery in the fighting.
The lack of a military breakthrough convinced the Allies it was time to withdraw from Gallipoli. It was decided the Newfoundland Regiment would help in the difficult task of covering the evacuation of Allied troops onto waiting ships. This rearguard operation went well and the Newfoundlanders were among the last Allied soldiers to leave Turkey in January 1916
The hardships and death they experienced were a taste of the even harsher experiences that were waiting when they were shifted to Europe’s Western Front in April 1916. By war’s end, more than 6,200 men had served in the regiment. The price was high, however—more than 1,300 died and many returned home with injuries to body and mind that lasted a lifetime. The loss of so many of its finest young citizens and the toll taken on the survivors was a heavy burden that Newfoundland had to bear for decades.
The eight-foot-tall caribou bronze represents the emblem of the Newfoundland Regiment.  The were originally designed by British sculptor  and officer Basil Gotto. Because of COVID, there was not a ceremonial unveiling of the statue (and little publicity).