Worst Year of the War for the German Army? Hands Down—1918

By almost any conventional way of measuring, the [1918]  campaign was far more costly, and involved greater physical demands, than any which came before.  This fact becomes clear from the casualty figures alone. Between 21 March 1918—the beginning of the German offensives—and the conclusion of the Armistice, the German army would suffer 1.8 million casualties. This amounted to about 225,000 casualties per month, or between 5 and 10 percent of the total strength of the Westheer.
Click on Image to Read Details 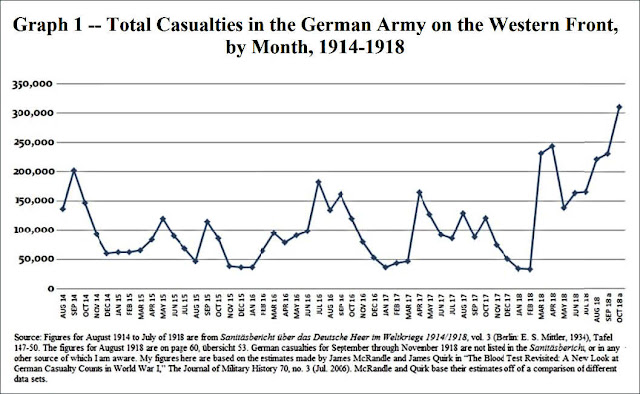 In both absolute and proportional terms, this was by far the highest rate of less suffered during the entire war. It was in fact one of the highest rates of loss sustained by any army in modern military history. It is nearly twice as high as German monthly losses on the Eastern Front in 1943, at the height of the fighting on the Eastern Front in World War II, and it is two-and-a-half times greater than British monthly losses during the Somme offensive.
Source:  PhD Dissertation " 'If Only This War Would End': German Soldiers in the Last Year of the First World War." Ryan Edward Zroka, 2013